A Chinese Cargo plane landed at the Jomo Kenyatta International Airport (JKIA) with gear to help in the fight against the COVID-19 pandemic.

Kenya: Cargo flight from China Southern Airlines arrives at JKIA with a donation of 18 tonnes of Covid-19 protective gear from Chinese companies.

According to flight details, the plane landed in Nairobi at 9.50 a.m. from Guangzhou in China on Friday, April 10.

Reports from Capital News further indicated that the flight landed in the country armed with 18 tonnes of COVID-19 protective gear.

The flight registration CZ633/CN633 from the Southern China airlines was reported to have arrived with no passengers on board.

The government on Sunday, March 22, declared that the Kenyan airspace would be closed to all passenger planes but that cargo planes would be allowed to fly in as usual.

Health CS Kagwe explained that Kenya and China had agreed to fly cargo ships and planes to supply goods into the country in an attempt to avert economic collapse.

He, however, clarified that all the staff who will accompany the cargo must be disinfected before leaving the country and quarantined on landing.

“There is Coronavirus, and after Coronavirus there will still be Kenya. In order for us not to suffer extreme economic losses, we have considered and found ways of ensuring that cargo vessels, cargo aircraft, and ships can come into the country provided they are disinfected at the point of departure and crew quarantined on arrival

The Chinese plane landing comes at a  time when allegations are rife that Kenyans and other Africans are being racially profiled as being the cause of the pandemic in China.

Kenyans and other Africans have been forced to live in the streets after they were evicted from their houses in China as the Chinese accused them of having Coronavirus. 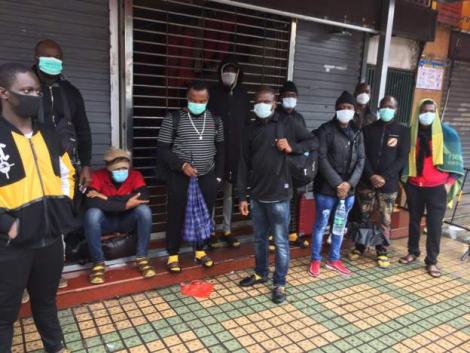 According to the Chinese Health authorities, 63 new cases were reported in mainland China with 61 of them said to have been imported.

Kenyans.co.ke spoke to a number of Kenyans stuck in China who are trying to find their way through the predicament facing them, with one residing in Guangzhou revealing that she was in quarantine, where food was being rationed and the condition was hard to live in.

You Can Now Legally Fly A Drone In Kenya

You Can Now Legally Fly A Drone In Kenya