Uhuru deploys KDF to flush out armed raiders in Baringo, Laikipia and Marakwet 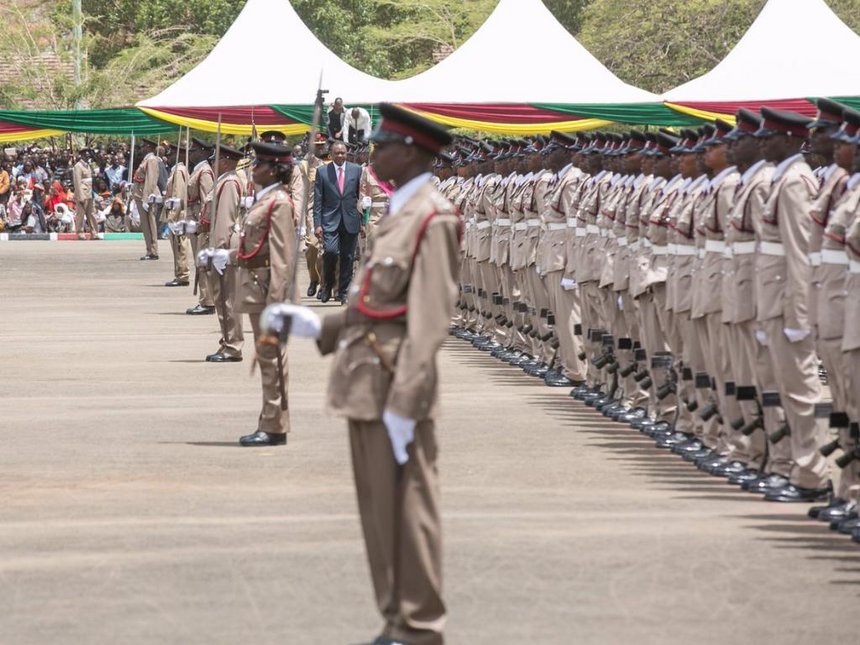 President Uhuru Kenyatta inspects a parade mounted by the Administration Police during a pass out parade at AP Training School, Embakasi on Friday, March 17, 2017. /PSCU

Uhuru deploys KDF to flush out armed raiders in Baringo, Laikipia and Marakwet

President Uhuru Kenyatta has deployed the Kenya Defence Forces (KDF) to disarm raiders in disturbed areas at the North Rift.

They will be part of the operation to flush out the raiders killing and maiming residents of Baringo, Elgeyo Marakwet, Pokot and Laikipia counties.

He said the decision was approved by the National Security Council – which he chairs, as a last resort.

“The deployment will further assist in disarmament and surrender of illegally held arms,” Uhuru said on Friday at the Administration Police Training College, Embakasi.

The President was at the college to oversee the passing out of 3,985 officers who had completed their 9-month training.

Uhuru congratulated the graduates, urging them to conduct their duty professionally and without bias.

He said those who have defied orders to surrender illegal firearms are enemies of the state and will be dealt with accordingly.

“The continued deterioration of the security situation in the affected areas has necessitated the involvement of the military,” Uhuru said.

KDF will assist the police in terms of manpower and equipment.

The head of state said his administration guarantees the safety of citizens as well as their property.

Uhuru said this is manifested in the provision of better equipment, vehicles as well as improved working conditions for the police.

“We have enhanced the quality of training received by the police,” Uhuru told the officers.

The death toll in Baringo as a result of bandit attacks in the past three weeks reached 21 on Thursday.

The bandits have paralysed transport, trade as well as pushed many out of their homes.

At Laikipia, most ranches have been run down following invasions by the said criminals acting in the pretext of looking for pasture.

The invasions culminated in the killing of Tristan Voorspuy, owner of Sosian ranch, who was shot dead on March 6.

Uhuru deploys KDF to flush out armed raiders in Baringo, Laikipia and Marakwet Reviewed by samrack on March 17, 2017 .