Kenya has had its fair share of notorious gangsters. 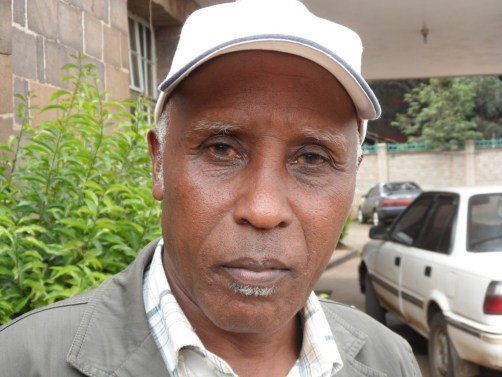 John Kiriamiti.One of the more lovable criminals and perhaps the luckiest of the lot.pic:Image: waza

Kenya has had its fair share of notorious gangsters.

9 Most Notorious Kenyan Gangsters Of All Time

Here are the deadliest criminals to ever terrorize the police and common mwanachi alike.

Wacucu made a name for himself in the late 1990s as part of a three-man gang with the others being Gerald Munyeria, aka ‘Wanugu’, and ‘Rasta’. Interestingly, all three were killed by the same supercop known as Daniel Seronei. I’ll talk about the other two separately since they were terrifying in their own manner. Wanugu and Wacucu started out as matatu touts before delving to violent crime.

Wacucu is said to have committed at least six recorded murders and countless robberies. Supercop Seronei and his team finally caught up with Wacucu and gunned him down on 4th January 1996 in Rongai. It is said that as he fell, his crime partner Wanugu took his gun and managed to escape.

Just like Wacucu, Wanugu was fierce and ruthless but he got sloppy and walked right into a police ambush in Kabata-ini,  Nakuru, six months after Wacucu was killed. He had gone out to run errands with his girlfriend when all of a sudden he heard the words “Wanugu…Hands Up!!” from the KenyanRambo himself, Mr. Seronei. But the guy didn’t go down without a fight. Wanugu is said to have grabbed his girlfriend and used her as a human shield. This didn’t help as he was still gunned down.

The dreaded Rasta was also tracked down by Seronei and his team at his mother’s home in Kiria-ini, Murang’a County. He was actually hiding in the goat’s shed when he was ambushed. Rasta was said to bribe cops for info on how the Flying Squad was tracking him, no wonder he was the last one to be busted. It is said that Rasta was so brave that he could, single-handedly, exchange fire with cops and manage to escape on numerous occasions. However, his day came too and he was gunned down. Supercop Seronei has been quoted as saying he gave Rasta the chance to surrender but the dreadlocked gangster insisted he’d rather die so he kept shooting.

Gachui had titanium balls. He would steal guns from cops at gunpoint. What? Yeah. I wonder what gun you have to have to steal a policeman’s gun at gunpoint. He committed countless robberies and murders too but unfortunately for him, he existed at a time when there was another supercop known as Patrick Shaw.

Shaw was a police reservist who was feared by all criminals in Nairobi. Word has it that he always rode solo and shot to kill. So Gachui should have known better, shouldn’t he? Well, he didn’t. He openly taunted Shaw for his failure to catch him. Little did he know his luck was about to run out.

On the day his luck ran out, Gachui stole an Audi and Patrick Shaw together with other policemen trailed him down to South C and cornered him. With nowhere to go, Gachui jumped out of the car in typical movie fashion and started shooting at the police. The following day, the newspapers wrote, “The officer shot the gangster through the mouth.”

One of the more lovable criminals and perhaps the luckiest of the lot. Kiriamiti is best known as the writer of the riveting My Life in Crime novel. he wrote the book while in confinement at the Naivasha Maximum Prison. Kiriamiti was on the police list of the most wanted criminals in Kenya when he was only 20 years old. Kiriamiti is best known for robbing banks. He was one of the rare criminals who never killed. After being released from jail, he became a full-time writer as well as a renowned philanthropist and social reformist rehabilitating street children in Muranga.

Matheri was feared by locals so much that when he was shot, many people went to the mortuary to confirm that he had indeed died so that they would celebrate. He brought pressure on himself after he murdered prominent African AIDS researcher, Job Bwayo; Lois Anderson, a Presbyterian missionary, and her daughter Zelda White, the wife of a U.S. embassy employee, a Carol Briggs, the missionary volunteer.

After months of being on the run, Matheri was ambushed by over 100 cops in 2007 at a rental home in the outskirts of Nairobi. Police said he was shot after emerging from the house with an AK-47 assault rifle. Matheri’s wife, Felistus Wanjiru Matheri, said her husband did not have a gun when he left the house, hence there are conflicting reports. “I pleaded with him for the sake of our kids to give up,” she said, adding that she did not know whether he was going to surrender when he did finally emerge from their house. Six of the couple’s children were inside the house at the time of the killing.

Wakinyonga was a Robin Hood of his time. He used to rob the rich and give money to the poor. Wakinyonga, who hailed from Kangemi was linked to several bank raids and car thefts, particularly in Nairobi. He had escaped police dragnets for a while. At one time five months to his death, he fled with bullet wounds on his buttocks and the right collarbone. His accomplice was however killed. He would, three months later shoot and injure a police sergeant.

Somehow, Wakinyonga seemed to know he would die by the gun. Legend has it that he had even dug a 30-foot deep grave at his home. That was 24 feet more than the recommended depth of the graves of peace loving citizens. Apparently, he was killed by none other than supercop Patrick Shaw, though this hasn’t been confirmed.

What is known is that on the night of Monday, June 26, 1978, Wakinyonga went to drink at Nyakiambi Lodge and Night Club in Kangemi. After sipping on too much booze, he started talking too much. “Let those CID men come and I will shoot them all,” he boasted, according to a report by The Standardon June 28. A police informer overheard him and called other law enforcers who surrounded the lodge. What followed is a wild gun battle that resulted in a dead Wakinyonga and several injured revelers.

Here’s a guy who escaped from prison three times. Not to forget he once lit up weed in the courtroom and showed the police the middle finger.  Shimoli got the nickname ‘the jackal’ from the Venezuelan terrorist Carlos the Jackal because they both evade capture for a long time. He is said to have committed 14 murders, 88 rapes, drug deals and numerous bank robberies. He even hacked his brother-in-law to death in broad daylight for snitching on him. Some say he even shot his wife in the back at one time.

Shimoli escaped from Kamiti Maximum prison in 1996 just days before he was to be hanged. He then escaped from a courtroom at another time after being recaptured. If there was anyone who knew how to pull real-life prison break episodes, it was this guy. In another instance, Shimoli escaped after a gun battle around Uhuru Park, when police were sure they had cornered him.

Shimoli was finally captured and jailed but he was released in 2007. During an interview with the press outside Kamiti prison, he expressed fears that he would be killed by people who wanted revenge against him. His fears were confirmed because two months later, he was shot dead by unknown people.

Cheruiyot was a Police Reservist turned criminal. He lost his job after it was discovered that he kept hiring out his gun out to robbers. Cheruiyot literally shot to infamy last October 19 when he killed police constable Karue at Imara Daima Estate in Nairobi. By killing an officer, he became one of the most wanted men.

He committed several robberies and murders until a fateful date in 2005 when police were tipped off that he was chilling in his house. A team led by former police commissioner Maj-Gen Mohammed Hussein Ali and CID director Joseph Kamau surrounded the house. After a five-hour shootout, Cheruiyot was gunned down.

Kenya has had its fair share of notorious gangsters. Reviewed by samrack on March 16, 2017 .

Share thisFacebookTwitterPinterestEmailWhatsAppJohn Kiriamiti.One of the more lovable criminals and perhaps the luckiest of the lot.pic:Image: waza Kenya has had its fair share of notorious gangsters. 9 Most Notorious Kenyan Gangsters Of All Time Here are the deadliest criminals to ever terrorize the police and common mwanachi alike. 1. Wacucu. Wacucu made a name for himself in the