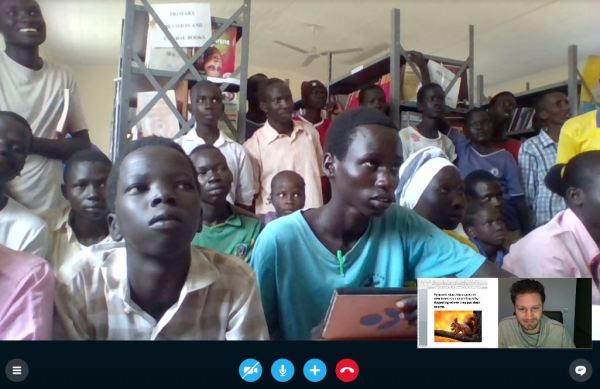 Microsoft’s Skype application is a powerful tool that can bring us closer to each other, no matter the distance or time zone. Skype helps in bringing communities together, families to be reunited, and as recently reported, educational opportunities to children.

In post by Koen Timmers on the Skype blog, Microsoft has shown the power Skype has in bringing educators together in helping children around the world. In April of 2015, educators around the world took part in conducting classes for refugees in a in Kenya. The place is called the Kakuma Refugee camp and houses over 179,000 refugees, 55% of them children, with 30 schools each with 20 classrooms spread among them.

After experiencing the results of this opportunity, Keon Timmers set out to create ways for educators to participate in educating these children in Kenya. He set up Project Kakuma, a community where educators could gather to assist in teaching classes for the refugee children of Kakuma. He assisted the camp by hosting a Skype class with 10 teachers at Kakuma on installing Skype to use for the classes. In addition, to reaching out to educators around the world, he created the game “Jump to Kakuma” for Windows 8, Windows 10, and iOS to help fund equipment for the schools such as laptops, cameras, and sound systems. The outreach from the education community has resulted in great fun facts that Keon Timmers mentioned in his post:

With the success of Project Kakuma and the power of Skype, classes are conducted each week covering topics like math to science. Participation in this project has led to educators contributing from around the world, lending their knowledge to the program and the children. With the refugees of Kakuma unable to leave from the camp, this project shows that the world cares about the education of all children and the power of technology.

How do you see Skype and Project Kakuma fulfilling more education needs for Camp Kakuma and other children around the world? Let us know in the comments.

In this story stream:

Skype helps teach refugee students in Kenya via Project Kakuma Microsoft’s Skype application is a powerful tool that can bring us closer to each other, no matter the distance or time zone. Skype helps in bringing communities together, families to be reunited, and as recently reported, educational opportunities to children. In post by Koen Timmers on the Skype