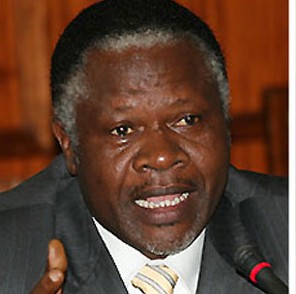 Former Kenya Power boss Samuel Gichuru and ex-Energy minister Chris Okemo withdrew nearly half a billion shillings from their secret offshore banks built on bribes before Jersey authorities froze the account in May 2002.

The Royal Court of Jersey says the Gichuru-Okemo slush fund received bribes in hard currency estimated at Sh997 million (£3.9 million and $4.2 million), but only half of the entire loot was found and seized last month.

Mr Gichuru and Mr Okemo had subtly wired large sums from the Jersey account to themselves in the years to 2002 and authorities were only able to recover and forfeit foreign currency amounting to Sh526 million (£3.28 million and $0.54 million), court papers show.

This means that Mr Gichuru and Mr Okemo jointly retrieved £629,329.6 and $3.7 million (Sh470 million at current exchange rates) from the slush fund before the long arm of the law caught up with them.

full-text of the asset seizure proceedings and judgment, seen exclusively by the Business Daily, offers a detailed breakdown of the goings-on in the secret account and a rare glimpse of the extent to which the duo benefited from their systematic bribery scheme.

The bribery and money laundering scheme was executed through Windward Trading Ltd — the entity through which Mr Gichuru received hefty kickbacks to award suppliers lucrative tenders during his two-decade tenure at the helm of Kenya Power.

“The defendant company (Windward) received and held the proceeds of criminal conduct perpetrated by its controlling mind and beneficial owner, Samuel Gichuru,” said Judge Julian Clyde-Smith in his ruling ordering the seizure of the entire cash held in the Jersey account.

“The company (Windward) played a vital role without which corruption on a grand scale is impossible: money laundering.” Finnish energy firm Wärtsilä, Knight Piésold, British engineering company Mott Macdonald and Capitan (Europe) Ltd were some of the global firms named in court papers as having paid kickbacks to Mr Gichuru’s entity, which had opened accounts with Jersey’s HSBC Bank Plc and Royal Bank of Scotland International.

For example, in the year to June 2001, Kenya Power had contracted three emergency power providers, Aggreko, Cummins and Deutz, which supplied a total of 587 gigawatt hours (GWh).

Kenya Power bought 632 GWh from privately held thermal generators, one of them built by Wärtsilä, in the period under review.  Mr Gichuru awarded Knight Piesold the £43 million Ewaso Nyiro hydroelectric power contract and much of it was paid upfront to the contractor to enable Windward get its “consultancy fee.”

Mr Gichuru in August 1986 set up Windward Trading in Jersey as the entity which would receive bribes disguised as ‘commissions’ or ‘consultancy fees’ from firms which won Kenya Power tenders.