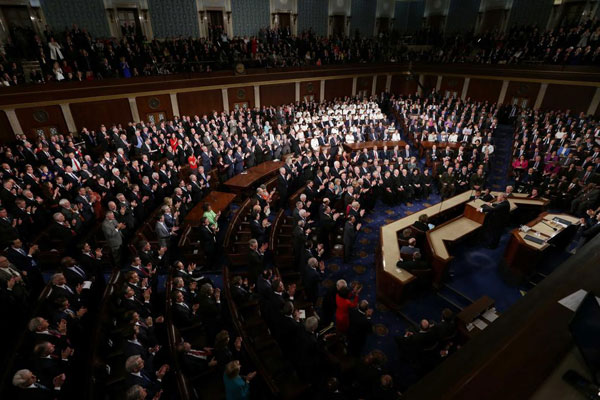 United States (US) President Donald Trump addresses a joint session of the American Congress at the US Capitol in Washington, DC on February 28, 2017. PHOTO | ALEX WONG | AFP

Mr Budd, who has been fighting the proposed deal between Kenya and New York-based L3 Technologies for several weeks, launched his latest attack in a speech to the US House of Representatives on Wednesday.

The Republican lawmaker from the state of North Carolina said a powerful “political class” in Washington enriches itself through insider dealings such as the Kenya-L3 arrangement.

Mr Budd noted, without specifically naming the company, that L3 has tentatively been awarded the contract to produce “12 airplanes that are essentially armed crop dusters.”

Kenya would also acquire two training planes and related components and services as part of the $418 million purchase. The weapons are to be used in Kenya’s war in Somalia against al-Shabaab.

“There’s only one slight problem with the deal — the defence contractor chosen to fulfil the sale doesn’t make this type of planes,” Congressman Budd said. “They’ve never done it before. In fact, there’s an extra $130 million built into this deal for them to design a whole new airplane.”

Iomax USA, a firm based in his own district, is the sole manufacturer of the kind of planes Kenya is seeking to obtain, Mr Budd said.

“They’ve been doing it for seven years,” he said in regard to Iomax. “They’ve got 50 of them in service around the Middle East. Their planes have dropped more than 4,000 bombs on Isis.”

But Iomax was not even considered for the Kenya deal, Mr Budd continued. “Nobody got a chance to bid. Nobody knew about it except the company that got it, and the bureaucrats involved.”

“You know the right people, have the right lobbyists, you get awards like this from the federal government without competition. Doesn’t matter if you don’t even make the product — they’ll give you some extra money to design it from scratch,” he said.

Mr Budd cited the Big Safari acquisition unit within the US Air Force as the key entity behind the proposed deal.

Describing Big Safari as “secretive,” the congressman said he had put 19 questions about the Kenya contract to officials in the Air Force unit but got answers to only four of them.

Excluded from this sort of cosy relationship are working-class Americans such as Iomax employees, Mr Budd added. In the Kenya case, they were up against “a $13 billion defence contractor and a $4 trillion federal government that appears to have forgotten impartiality,” he said.