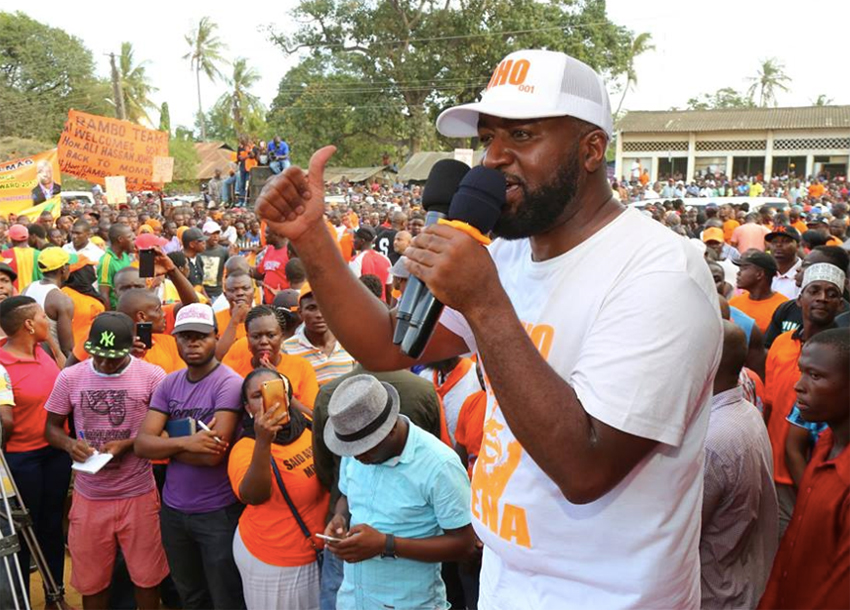 Mombasa Governor Ali Hassan Joho speaks to his supporters shortly after his arrival in the country from the United States of America. Photo/FILE

The government has denied using state agencies to intimidate Mombasa Governor, Ali Hassan Joho, following reports by the opposition that the Jubilee administration was on a mission to bring down the outspoken governor.

In a statement to newsrooms, government spokesperson, Eric Kiraithe, said that the government and President Uhuru Kenyatta, have nothing against the Mombasa Governor.

This follows the summoning of the Mombasa Governor by police to record a statement over the legitimacy of his Kenya Certificate of Secondary Education (KCSE) certificate that has elicited mixed reactions.

The government says the moves is aimed at weeding the country of education fraudsters and ensure those who are elected to public offices are persons of integrity and high moral standing.

“The government agenda to clean our education system of academic fraudsters will continue with the full support of all government departments as a part of entrenching justice, fairness and the rule of law in the republic,” said the government spokesman in a statement to newsrooms.

On the alleged failure of the Mombasa Governor to comply with the tax regulations, the government says that the Kenya Revenue Authority (KRA) has the mandate to investigate any person deemed to have neglected their obligation to pay taxes.

“Similarly, the obligation to pay taxes falls squarely on the shoulder of every citizen and no person shall be exempted regardless of his/her perceived status in life,” read the statement in part.

“We wish to inform the public that the Kenya Revenue Authority commenced investigation into tax fraud by a company associated with Joho in January 2016 following leads developed by analysis of KRA’s internal data and information from patriotic tax paying Kenyans.”

The spokesman added: “When the company was duly informed that it is under investigation, the said company rushed to court and obtained an injunction preventing KRA from proceeding with the investigation. In January this year, the injunction was lifted and investigations resumed.”

“We view it as unfortunate that such diligent efforts by government agencies have been misinterpreted to serve hopeless political purposes.”

Mr Kiraithe says that Governor Joho should breathe easy as the truth about his education and tax obligations is of public interest and will be known and set him free.

He has also called on Kenyans not fall into temptations of defending politicians who have failed the integrity test.

Mombasa Governor Ali Hassan Joho speaks to his supporters shortly after his arrival in the country from the United States of America. Photo/FILE Gov’t says cleaning system of academic fraudsters, not targeting Joho The government has denied using state agencies to intimidate Mombasa Governor, Ali Hassan Joho, following reports by the opposition that the Jubilee