Treasury CS Henry Rotich says “As of this Morning, Over 68K Kenyans had registered on M-Akiba with subscription at 79 Million 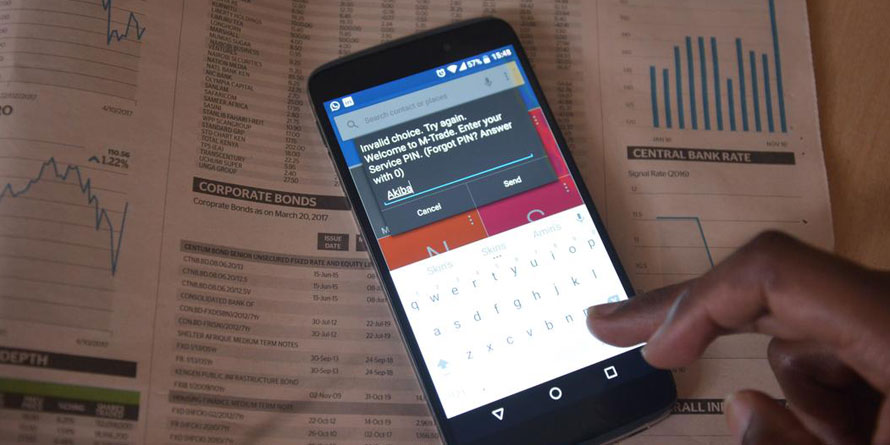 Treasury CS Henry Rotich says “As of this Morning, Over 68K Kenyans had registered on M-Akiba with subscription at 79 Million

The Treasury is initially expected to auction the first tranche (Sh150 million) of the bond that allows every individual to invest a minimum of Sh3,000 and any additional amounts in multiples of Sh100.

The bond is open to all mobile users registered with Safaricom and Airtel and the interest payable every six months.

The three-year bond — modelled as infrastructure bond — will be the first in the world to be sold on a mobile money platform.

It is expected to open up the bonds market, currently dominated by financial institutions and high-net-worth individuals, to retail investors.

Bond buyers currently pay a minimum of Sh50,000 or Sh100,000 for infrastructure bonds, locking out many Kenyans from accessing the market.

“Investors will receive details of amounts invested via text message upon making payment via mobile money…interest income on M-Akiba is tax-exempt,” the bond prospectus says.

The Treasury is expected to issue the balance of Sh4.85 billion in the second or third quarter of the year.

A successful bond auction is likely to see the government move part of its fundraising activities to M-Akiba and make the mobile bond market a factor in the pricing of deposits among different players in the money markets.

Under the interest rates capping law, banks are required to pay a minimum of seven per cent interest on all money kept in deposit-earning accounts but they have the option of offering customers transaction accounts that do not pay interest.

Millions of Kenyans also keep money in their mobile wallets, earning no interest on the savings. This is the money that the Treasury expects to be invested in the M-Akiba bond.

Small savers are also forced to put their money in illiquid investment vehicles such as investment clubs (chamas) where they have to wait for months on end before being paid a lump sum, mostly without interest.

The latest Central Bank of Kenya (CBK) statistics show that the gross deposits held in Kenyan banks stood at Sh2.68 trillion at the end of November 2016, with about 95 per cent of all bank accounts holding less than Sh100,000.

The government will also be banking on the success of M-Akiba to break the stranglehold that banks have on its domestic borrowing.

The mobile bond should also allow the State to lower its cost of debt, an issue of concern at a time when the public debt to GDP ratio had hit 50 per cent.

Most recently, the Treasury has sold a five-year bond with the yield curve of about 13 per cent, with the most recent infrastructure bond issued last month fetching a rate of 13.55 per cent in the primary market.

M-Akiba has been in the works since October 2015 but its launch has been postponed multiple times as the Treasury worked out the modalities of trading it in the secondary market at the Nairobi Securities Exchange (NSE).

The mobile-phone-based bond was also kept on ice as the Treasury awaited calm to return to the volatile government securities market that had complicated its pricing.

The rates have largely stabilised now, with CBK signalling strong intent to keep yields close to the prevailing curve by rejecting high-priced offers made on both long- and short-term debt in the past three months.

The Central Depository & Settlement Corporation (CDSC) will be the selling agent for the M-Akiba bond, unlike other bonds that are issued by the government through the CBK.

Treasury CS Henry Rotich says “As of this Morning, Over 68K Kenyans had registered on M-Akiba with subscription at 79 Million Reviewed by samrack on March 30, 2017 .

Share thisFacebookTwitterPinterestEmailWhatsAppA SCREENSHOT OF THE M-AKIBA MOBILE TRADED BOND,  LAUNCHED BY THE NATIONAL TREASURY CABINET SECRETARY ON MARCH 23, 2017. PHOTO | SALATON NJAU | NMG  Treasury CS Henry Rotich says “As of this Morning, Over 68K Kenyans had registered on M-Akiba with subscription at 79 Million The Treasury is initially expected to auction the