You are ruining your legacy, US tells Raila 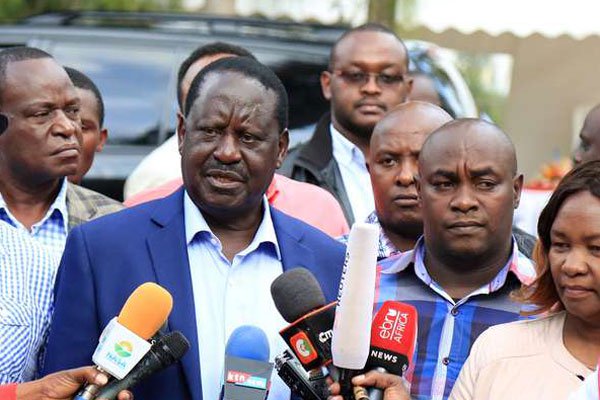 Nasa leader Raila Odinga speaks to journalists when he visited the late MP Francis Nyenze’s family at their Karen, Nairobi, home on December 9, 2017. He has pushed for the formation of People’s Assemblies in his strongholds. PHOTO | DENNIS KAVISU

You are ruining your legacy, US tells Raila

The United States of America on Tuesday warned Nasa leader Raila Odinga that he risks ruining his hard-fought legacy should he go ahead with his plans to be sworn in as the “people’s president”.

While urging Mr Odinga to drop his oathing bid, Mr Donald Yamamoto, the acting assistant secretary for African Affairs in President Donald Trump’s administration, promised to bring the former prime minister and President Uhuru Kenyatta to a table of negotiations on political and electoral reforms.

Mr Odinga has in recent days asked the government to stop issuing death threats to National Super Alliance leaders over the planned swearing-in ceremony, and warned that he is not afraid of death for “treason”.

In a teleconference with Kenyan reporters, Mr Yamamoto repeatedly praised Mr Odinga’s political record and his commitment to achieving reforms in Kenya.

“We’ve known the former prime minister over the years,” he said. “He has a great story — the need for political reform. He is famous for, noted for, respected for reforms.”

REFORMS
Recounting a recent discussion with the Nasa leader in Nairobi, Mr Yamamoto noted that he had urged the 72-year-old politician to focus on his “legacy.”

Mr Yamamoto said President Kenyatta had expressed commitment to bring about electoral and judicial reforms, and exuded confidence that it should be possible to agree on the way forward for the country.

He said the US enjoys a “very constructive” relationship with both the Kenyan government and the opposition, but warned that, while Washington is willing to bring together President Kenyatta and Mr Odinga to the negotiating table, any reforms must be pursued constitutionally.

“Forming a separate or parallel government is really unhelpful,” he said of Mr Odinga’s planned swearing-in.

The Nasa leader, who successfully petitioned the August 8 presidential election but withdrew from the repeat poll on October 26, has refused to acknowledge Mr Kenyatta as the duly elected president.

He has pushed for the formation of People’s Assemblies in Nasa county strongholds, forcing Attorney-General Githu Muigai to warn him that he is about to commit treason, whose charges attract the death penalty in Kenya.

And, speaking in Kitui on Monday during the burial of Kitui West MP Francis Nyenze at Kyondoni village in Kabati, Mr Odinga scoffed at the AG’s warning, saying he was ready to pay the ultimate price if that is what will deliver electoral justice to Kenyans.

“I want to answer Prof Muigai and his bosses today; that we are not afraid of dying for the sake of this country,” Mr Odinga said.

“His repeated threats to open treason charges against us will not stop us from our planned swearing-in.”

Mr Odinga said President Kenyatta and his deputy William Ruto are in office illegally, and that Nasa does not recognise the Jubilee government.

He said before the Supreme Court nullified the August 8 presidential elections, it had ordered the Independent Electoral and Boundaries Commission to open its servers, but the elections agency disobeyed the order, forcing Nasa to boycott the repeat poll.

“IEBC is still in contempt of the Supreme Court ruling that annulled the presidential elections, because it refused to allow access to the servers as ordered,” he said, adding that he was the clear winner.

The Nasa leader said it was naive for Jubilee to assume that the country will accept and move on after they took the reins of power through a fraudulent electoral process.

“Kenyans want electoral justice, a reformed police service that doesn’t use brutal force, an independent Judiciary that cannot be intimidated by the executive, and strengthened devolution,” he told the mourners.

“We don’t want to be told to foster peace in the absence of justice for all Kenyans.

“As you preach peace, you should know that there can never be peace without justice,” Mr Mudavadi said.

The late Mr Nyenze was eulogised as a peacemaker.

National Assembly Speaker Justin Muturi said he had an easy time working with the former Minority Leader in the last Parliament.

Dr Kasalu and Mrs Ngilu said they will campaign for Mrs Nyenze, while Prof Kibwana said he will help her clinch the Wiper party ticket to contest the post.

Mr Kenyatta and Mr Ruto, who were expected at the funeral, did not attend.

Also absent was Mr Musyoka, who is still in Germany.

You are ruining your legacy, US tells Raila Reviewed by samrack on December 19, 2017 .

Nasa leader Raila Odinga speaks to journalists when he visited the late MP Francis Nyenze’s family at their Karen, Nairobi, home on December 9, 2017. He has pushed for the formation of People’s Assemblies in his strongholds. PHOTO | DENNIS KAVISU  You are ruining your legacy, US tells Raila The United States of America on