Kidneys:When the janitor of your body fails, life gets hard 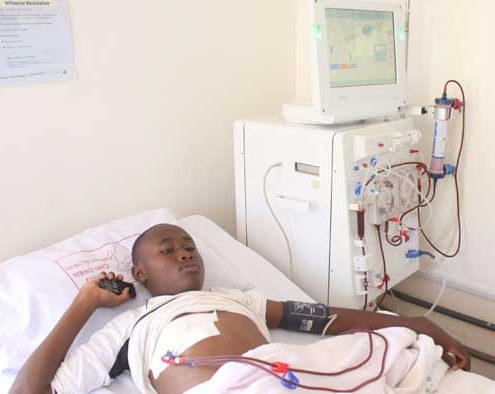 Once kidneys fail one has to undergo two dialysis sessions every week to clean one’s blood, which takes a toll.

Kidneys :When the janitor of your body fails, life gets hard

He has been treated for a chronic headache and occasional vomiting at local dispensaries for months, but when he started losing his sight, he rushed to the local hospital, where the news was broken to him.

Every Wednesday and Saturday he travels more than 120 kilometres from his Uriri home to Embu town for dialysis, spending more than Sh1,600 on fare only.

His father, Julius Muthee, says they chose the private facility in Embu as the only private dialysis centre in Meru is overwhelmed due to the ongoing doctor’s strike.

“He had been going for dialysis at a hospital in Nairobi West, but due to the high cost we decided to go back home. In Meru, dialysis is now available at Meru Teaching and Referral Hospital and St Theresa’s Mission Hospital, but we were told the four machines at the mission hospital are overwhelmed,” Mr Muthee says.

He has spent about Sh350,000 on hospital bills alone in the last three months.

“I was forced to sell a quarter acre of land and two bulls to raise the money.  We are currently spending more than Sh15,000 for the two dialysis sessions every week.”

However, the family got a reprieve recently after they were allowed to pay for the dialysis sessions using a National Hospital Insurance Fund (NHIF) cover.

Brian (18) says he has not reported to school for the first term due to his condition.

“Last year I could not concentrate in class due to eye problems. I am hoping that we get money for a transplant so that I can continue with my studies,” he says.

His father, who is a plumber and relies on contracts, says he has not been able to go to work since his son was diagnosed with the condition.

The family is also coming to terms with the high cost of special foods that Brian must be given every day.

Currently, the family is trying to raise more than Sh3.5 million for kidney transplant.

In Nairobi, a winding maze of corridors and countless turns from Kenyatta National Hospital’s casualty department leads to the hospital’s renal unit.

The hallway is eerily quiet; the bed in the wards neatly arranged and separated by curtains.

Here, potential kidney donors lie waiting for test results that will determine whether or not they are a match for an ailing patient.

Compared to many other wards at KNH, the renal transplant ward, a small room with about 10 beds, is exceptionally neat, with a nurses’ station strategically positioned to face the entrance. From here, a nurse ushers in patients walking in from their dialysis sessions upstairs.

“It is extremely important to keep it this clean to prevent infections on recuperating patients and donors,” explains Nancy Wang’ombe, a transplant coordination nurse at the unit.

On the upper deck of the ward is the dialysis room, its spooky silence made worse by the beep-beep of machines.

Sumaya Abdi from her hospital bed during an interview after a dialysis session at Kenyatta National Hospital on December 11, 2015. PHOTO | FILE

This is a second home for 18-year-old Sumeiya Abdi, her frail body a monument to the many battles she has fought in this room.

Sumeiya has not been in school since 2013, when she was diagnosed with end-stage chronic kidney ailment.

She is among the patients hooked onto the 20 dialysis machines at KNH — the country’s main referral and teaching institution.

Her father, Ahmed Abdi, who has been by her side since doctors broke the news to her daughter four years ago, remembers the day the gravity of the disease hit him:

“One day she woke up with swollen cheeks and feet but was not complaining of any pain. Even so, I decided to take her to a doctor friend who, following a couple of tests, told me that my daughter was presenting early signs of kidney problems.”

In the beginning, 47-year-old Abdi says it was difficult to both detect his daughter’s condition, and even more difficult to accept the results of the biopsy.

“We were in denial and were very reluctant to let her undergo the grueling tests. Upon receiving the results, the doctor told us that her kidneys had shrunk and become scarry. About 72 per cent of her renal volume had also been depleted, making her kidneys totally non-functional,” the father of six says.

To help her cope with the condition, she travels to KNH from Kajiado twice a week to undergo dialysis, at a cost of Sh2,500 per session. She needs a transplant, but she is yet to find a donor.

“It is not only financially draining, but also emotionally tiring,” says Mr Abdi, who alternates with his son to take care of Sumeiya while she undergoes dialysis.

Even worse, none of Sumeiya’s close relatives was a suitable donor. Her father offered one of his kidneys to save her life, but he failed the glucose tolerance test, a pointer to the likelihood of developing diabetes; while her sibling, Ahmedsiyat Abdi, did not have a national identification card, a key requirement for organ donation under the Human Tissue Act 2012.

“Initially, I thought that with the will to do so, transplants were an easy procedure. The tests are not only grueling, the turnaround time for results is also long,” says Abdi. “The doctor also said that at 18, the boy is considered medically young; they preferred a donor aged at least 22.”

Besides the challenge of finding a donor, Mr Abdi also does not have the Sh500,000 needed to perform the surgery.

Whereas Sumeiya’s mother would have been the next ideal option for the young girl, she could not donate one of her kidneys as she was pregnant.

To date, Sumeiya still undergoes dialysis with the hope that she will soon get a suitable donor.

It is a hard life for her, but even then, and despite all the gloom, she is among the lucky few who get to survive through the years as many other patients succumb to their ailment, either for want of resources, or opportunities for treatment.

of the world population represents the ration of the two million people who receive treatment for kidney failure. The majority are treated in only five countries — the United States, Japan, Germany, Brazil, and Italy.

Kidneys:When the janitor of your body fails, life gets hard Reviewed by samrack on March 7, 2017 .

Share thisFacebookTwitterPinterestEmailWhatsAppOnce kidneys fail one has to undergo two dialysis sessions every week to clean one’s blood, which takes a toll. KIDNEYS: A Kenyan success story Kidneys :When the janitor of your body fails, life gets hard Brian Mwenda, a Form Four student at Bishop Lawi Imathiu Secondary School in Meru, was diagnosed with kidney