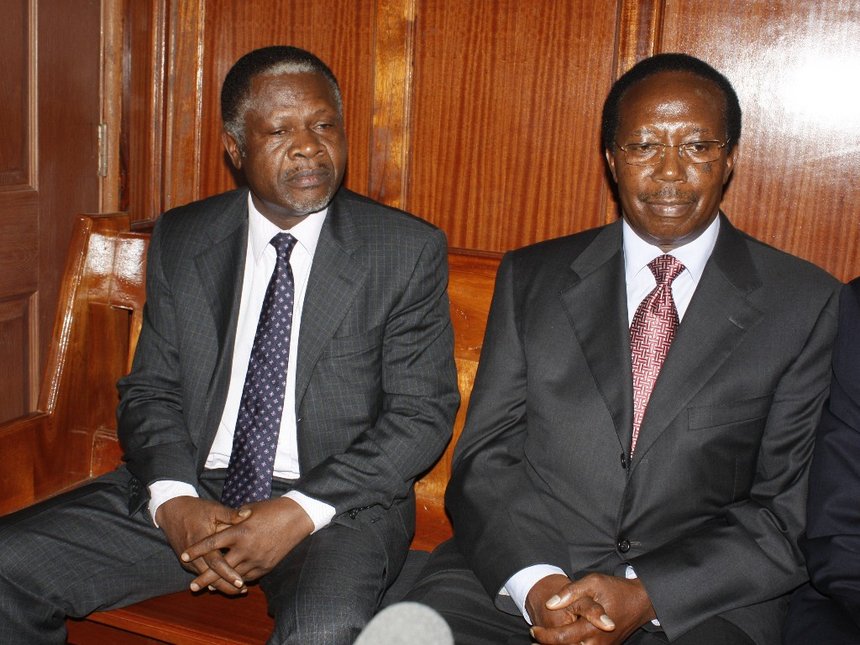 Nambale Mp Chris Okemo and Samuel Gichuru at the high court for the hearing of their extradition case to the jersey.pic\file

Kenya will receive Sh380 million suspected to be proceeds of corruption, that had been stashed in Jersey Island by former parastatal chief Samuel Gichuru and former Energy minister Chris Okemo.

This follows an agreement on March 3, 2016, between the governments of Jersey and Kenya that will see the return of the assets.

A statement sent to newsrooms yesterday from Jersey authorities, through the British High Commission in Nairobi, says the agreement is to secure the return of the funds that were confiscated by the Royal Court of Jersey in February 2016 after the defendant company Windward Trading Limited pleaded guilty to four counts of laundering the proceeds of corruption.

The corrupt activities took place in Kenya where Windward’s beneficial owner, Samuel Gichuru, is resident. During the period on the indictment, Gichuru was the chief executive of the Kenya Power and Lighting Company the statement says.

On February 24 last year the Royal Court of Jersey gave a confiscation order for the seizure of the entire Sh520 million hidden in the offshore account of Windwards Trading Limited. It is alleged Gichuru used the firm to receive bribes to award tenders to foreign forms during his time at Kenya Power.

Jersey Authorities have been pushing for the extradition of Okemo and Gichuru to face money laundering and fraud charges in Jersey in connection with Windward’s activities. Even though the Attorney General of Jersey requested their extradition in June 2011, the proceedings are still ongoing.

“We are delighted to reach agreement with the Government of Jersey on this important matter. We welcome the positive cooperation between Kenya and Jersey and look forward to an enhanced partnership in future,” National Treasury PS Kamau Thugge said when he signed the agreement on behalf of the Kenyan government.

“The signing of this agreement conveys a powerful message that both Jersey and Kenya are committed to combating issues of historic corruption and financial crime.”

Senator Ian Gorst, Chief Minister of Jersey, said, “The process is one that has understandably taken some time because of the legal complexities of confiscation and asset sharing. The completion of this agreement is a step towards ensuring these funds are returned to the people of Kenya, where they rightfully belong.”

Gichuru, Okemo assets abroad to be returned Reviewed by samrack on March 7, 2017 .

Share thisFacebookTwitterPinterestEmailWhatsAppNambale Mp Chris Okemo and Samuel Gichuru at the high court for the hearing of their extradition case to the jersey.pic\file Gichuru, Okemo assets abroad to be returned Kenya will receive Sh380 million suspected to be proceeds of corruption, that had been stashed in Jersey Island by former parastatal chief Samuel Gichuru and former