WHAT TO EXPECT DURING A CIVIL WEDDING AT SHERIA HOUSE 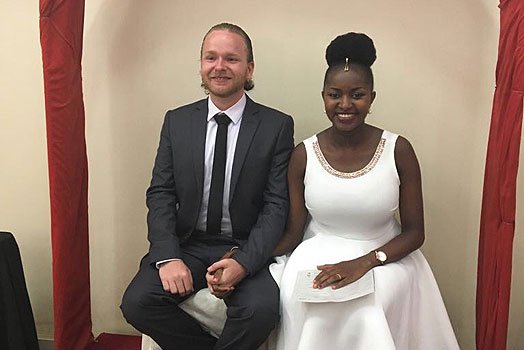 Sophia Kitonga and her Dutch fiancé Glenn ten Cate during their civil wedding ceremony at the Registrar of Marriage’s office in Sheria House. PHOTO | EVELYN MUSAMBI

WHAT TO EXPECT DURING A CIVIL WEDDING AT SHERIA HOUSE

By EVELYNE MUSAMBI
There are three legal ways to get married in Kenya. It can be through a traditional customary union, a religious wedding or a civil wedding.

Having witnessed a lovely civil wedding ceremony on Tuesday at the Registrar of Marriage’s office in Sheria House between Sophia Kitonga and her Dutch fiancé Glenn ten Cate, I chose to detail on the procedures and what to expect if you are planning a similar ceremony.

1. Cost
If it’s a civil wedding between two Kenyans, you will be required to pay Sh600 during the first visit to the office of the registrar to file for notice of marriage 21 days before the date you intend to get married.

After the notice, the couple is then required to pay Sh3,300 and is given a wedding date according to the diary. In the case I witnessed, the couple paid for a special license as it was a wedding between a Kenyan national and a foreigner.

2. Day and time
Be early. The civil weddings are conducted between 9am and 3pm every weekday after the expiry of the 21-day notice. Sophia and Glenn were there at 9am and were number nine on the queue as other couples had arrived earlier.

3. On arrival…
Once a couple gets to the registrar’s office at Sheria House, it is allocated a number on the queue then asked to wait at the common waiting area. After a while the lovebirds are called to one of the rooms to provide the details of their witnesses and confirm the details as captured on a soft copy of the certificate before printing is done.

4. At the registrar’s chamber waiting room
The couple and their guests are then ushered into a different waiting room located next to the marriage room. There is a changing room for the brides who would wish to don a bridal gown to their civil ceremony and for make-up glamming up.

On this day, there were no brides in gowns just white fancy dresses and most brides had done their own make-up. The waiting room has a 15-seater sofa and on Tuesday, excitement was evident among the three couples and their friends who were in the room at that time. Some couples had flower girls and page boys dressed up to play their role of ushering in the bride and groom.

5. Witnesses
Every couple has to bring two witnesses and is allowed a maximum of 15 guests.

6. The ceremony
Once it’s the couple’s turn, an officer calls out the name of the groom and the couple along with their guests access the marriage room using one door as the other couple exits through another door-  all smiles as they are now legally married.

The marriage room has 10 office armless seats and six other plastic seats dressed in white and with red tie-backs at a photo area. The registrar calls the two witnesses and the couple to sit in the front seats then begins the ceremony.

After his vows, the groom is then asked to place the ring on the bride’s finger and the guests can clap at their own pleasure.

The same procedure is done by the bride before the registrar allows the couple to hug and kiss. Sophia and Glenn were at this point blushing amid cheers from friends as they sealed their marriage with a kiss.

8. Certificate signing
Three hard copies of the certificate are given to the couple and their witnesses to sign. At this point the guests are allowed to sing. The registrar signs all the copies as well and gives two of them to the couple. Sophia and Glenn held on to their legal document as they proceeded to take a few photos with friends.

9. Photo session
The couple then moves to one side of the room where the seats are dressed in white and red with a red arc and carpet placed on a platform. Photos are taken with the witnesses and other guests.

In Sophia and Glenn’s case, they requested to have a photo with the registrar as some of the friends joined in for a group photo. Congratulatory hugs and handshakes are then shared and as the couple exits, the officer calls another couple.

10. Dancing, cake and champagne
No popping of champagne, cake-cutting or dancing is done in the registrar’s office although the guests can sing during the ceremony. The couple is allowed to hold a reception party after the ceremony at a location of their choice.

In Sophia and Glenn’s case, a game drive at the Nairobi National Park in the afternoon was the perfect way to celebrate with friends.

Nairobi News congratulates Glenn and Sophia who allowed us to witness and share their moments.
Source: Nairobi News

WHAT TO EXPECT DURING A CIVIL WEDDING AT SHERIA HOUSE Reviewed by samrack on March 14, 2017 .

Share thisFacebookTwitterPinterestEmailWhatsAppSophia Kitonga and her Dutch fiancé Glenn ten Cate during their civil wedding ceremony at the Registrar of Marriage’s office in Sheria House. PHOTO | EVELYN MUSAMBI WHAT TO EXPECT DURING A CIVIL WEDDING AT SHERIA HOUSE By EVELYNE MUSAMBI There are three legal ways to get married in Kenya. It can be through