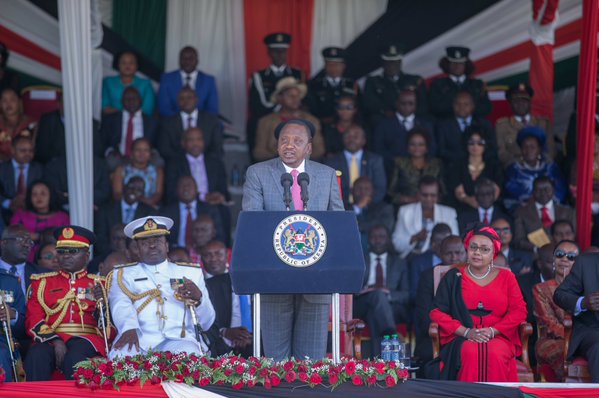 Fellow Kenyans, ladies and gentlemen,Let me start by thanking the people of Nakuru County for their warm welcome today. The decision to share the celebrations of our nationhood among the counties is part of the Jubilee administration’s desire to include every Kenyan, in word and in deed.

We gather to commemorate the day, fifty three years ago, when Kenyans finally took control of their own government: the day we began to govern ourselves; the day we took responsibility for our social, economic and political destiny.

Today, ladies and gentlemen, I am proud to be Kenyan for three reasons. First, after half a century of self-rule, we have shown our ability to renew and re-imagine our nationhood. We won our independence and became a centralised state; today we have constitutionally devolved the responsibilities of governance to 47 counties.

Our journey since that first Madaraka day has been one of growing political and administrative maturity. In embracing devolution, we set the stage for equitable access to resources and opportunity, brought government services closer to Kenyans, and reshaped our representative politics.

That’s why we are in Nakuru today. We are here because government is no longer a distant administration, based in Nairobi; rather, government is now part and parcel of this community, and every other like it across Kenya.

You and I have a second reason to stand tall as Kenyans. Our forefathers suffered greatly to free us from the colonial yoke. Loved ones were lost, and our freedom fighters endured the bitter pain of injustice. Still, they paid the price, and won our freedom for us. We are grateful for their commitment and sacrifice, and we are the proud inheritors of their heroism.

Our fathers won because of their unity, and that is why they vowed to fuse the aspirations of all our different communities into a single national purpose. They joined together in a national covenant that would bind them, and all who came after them. In making that covenant, they vowed to build a nation that would earn its place in the world: a nation in which poverty, disease and ignorance would have no home.

This nation would be founded in fairness, allowing every Kenyan the liberty to achieve their dreams. They also declared that all men would be equal under this covenant. With this exchange of promises, all of us became Kenya; and Kenya became all of us. The nationalist covenant agreed all those years ago still binds us together.

Kenya: President Kenyatta’s Madaraka Day Speech Fellow Kenyans, ladies and gentlemen,Let me start by thanking the people of Nakuru County for their warm welcome today. The decision to share the celebrations of our nationhood among the counties is part of the Jubilee administration’s desire to include every Kenyan, in word and in deed. We gather