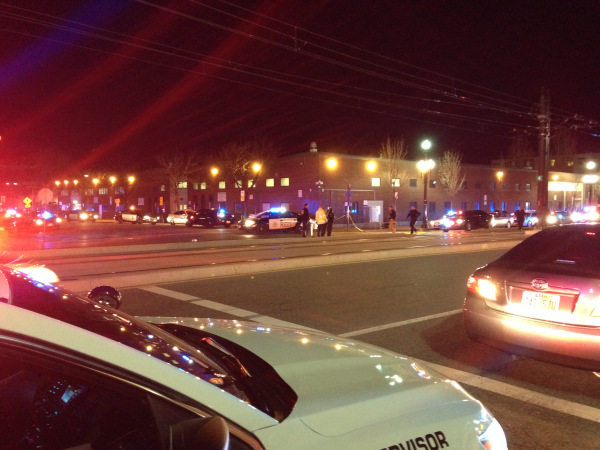 Salt Lake City Police have confirmed two officers were involved and that at least one officer fired shots, but they have not yet provided many official details about their take on the shooting.

The Unified Police Department is investigating. Utah law requires that all officer-involved shootings be investigated by an outside agency.

Officers from various agencies, including Salt Lake City, West Valley City, Unified PD and Utah Highway Patrol, responded and were observed attempting to get several large crowds of people to disperse from the area. FOX 13 crews at the scene reported there were hundreds of people scattered among several groups spread over the area.

Police respond to report of a shooting in Salt Lake City February 27.

“Our officers called for more assistance, several people were agitated in the crowd,” Wilking said. “Our officers started arriving on scene, encountered a lot of hostile people upset about what had taken place. And we began clearing the area so that we could preserve the scene that’s in there.”

Officials said nearly 100 officers responded during the course of the incident, and some police were observed with riot gear.

Some people were yelling at officers, while others reportedly threw rocks, bottles and other debris. Police said some officers may have been injured after members of the crowd threw items at them, but did not provide specific details.READ MORE

Nearly 100 cops respond to angry crowds after Kenyan teen shot by Salt Lake City police Salt Lake City Police have confirmed two officers were involved and that at least one officer fired shots, but they have not yet provided many official details about their take on the shooting. The Unified Police Department is investigating.