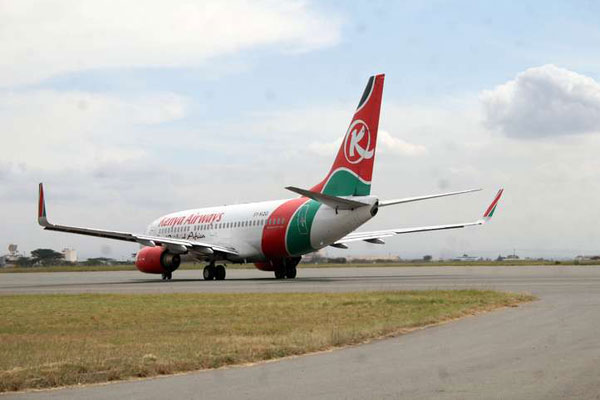 Kenya Airways plane on the run way at the Jomo Kenyatta International Airport. KQ could miss a chance to ride on gains made during President Uhuru Kenyatta’s trip to Israel unless it gets back on good financial footing soon. PHOTO | LIZ MUTHONI | NATION MEDIA GROUP

Kenya Airways could miss an opportunity to ride on gains made during President Uhuru Kenyatta’s trip to Israel unless it gets back on good financial footing soon.

President Kenyatta said one of the major agreements reached between Kenya and Israel during his visit, was one paving the way for direct flights between Nairobi and Tel Aviv. He said all required clearances have been given by Israel and Kenya Airways may start taking advantage of the deal.

The Kenyan president also negotiated for increased trade deals, exportation of labour and expansion of student exchange programmes, which offers a great opportunity for airlines plying the route.

KQ, which was scheduled to fly directly from Nairobi to Tel Aviv last year, has, however, seen the plans thrown in the back burner after the national carrier flew into headwinds.

“We had gotten the green-light for direct flights and were ready to fly but until KQ can get its act together then we will be able to see if it can pick up,” Kenya’s Ambassador to Israel, Mr Agostino Njoroge, told the Nation last week.

Israel cancelled direct flights to Kenya in 2002 following a terror attack on an Israeli-owned hotel in Kikambala and an aeroplane belonging to the country’s airline.

Thirteen people died and 80 others were injured in the raid on Paradise Hotel, while two surface-to-air missiles fired on the plane missed the target.

Mr Njoroge said Israel had reviewed the security concerns and was committed to direct flights which was only held back by financial troubles at Kenya Airways.

According to the Israel Airports Authority, several airlines alongside KQ were set to enter the country’s airspace between March and October last year.

Others would also be offered to Boston by El Al, and direct flights to Florence and Bologna in Italy, to Ibiza in Spain and Porto in Portugal by Arkia.

Mr Njoroge said the direct flights would have helped re-balance Kenya’s trade with Israel which was lopsided on a ratio of 1 to 9 with Kenya importing electronic and security equipment from the Jewish State.

Kenya Airways plane on the run way at the Jomo Kenyatta International Airport. KQ could miss a chance to ride on gains made during President Uhuru Kenyatta’s trip to Israel unless it gets back on good financial footing soon. PHOTO | LIZ MUTHONI | NATION MEDIA GROUP KQ’s financial problems put Nairobi- Tel Aviv direct