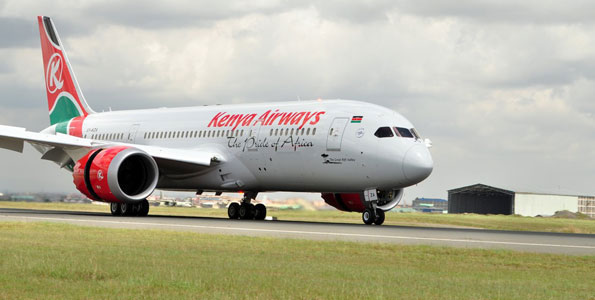 National carrier Kenya Airways has sold off its prime landing slot at London’s Heathrow airport for an estimated Sh7.5 billion in a move aviation experts say could significantly affect the airline’s

The morning slot, previously used by Kenya Airways, will now be used by Oman Air starting March 27, the same day KQ will begin its afternoon arrivals in London.

It has also emerged that Oman Air has agreed to a wet leasing deal for two of KQ’s Boeing 787-8s as part of the investment by the Middle Eastern airline.

Wet leasing deals in aviation are those where an airline leases out an aircraft, complete crew, maintenance and insurance to another airline in return for pay by hours operated.

KQ, as the Kenyan carrier is commonly known, has sold the morning slot it inherited from the defunct East African Airways under what is termed grandfather rights for US$75 million in addition to the evening departure slot it sold to Emirates for between $15 – $25 million, making a total deal value of $90 – $100 million.

News of KQs sale of landing slots first broke in the UK’s Sunday Times, which reported that the deal between the carrier and Oman Air is one of the three slot transfers that took place at Heathrow this year.

Air France-KLM, which owns a 27 per cent stake in KQ, is said to have transferred two additional slots, one to Oman Air and the other to Emirates.

KQ’s sale of its coveted 5.30 a.m. arrival slot is the highest priced deal to have taken place at Heathrow, beating the previous Sh6 billion ($60 million) record payment that American Airlines made to Scandinavian carrier SAS a year ago.

Reports indicating that KQ pocketed only Sh3 billion of the total Sh7.5 billion earned from the sale of the prime morning landing slot has raised questions as to how the national carrier shared the sale proceeds with its partners AF-KLM.

KQ declined to comment on this story stating that it planned to share the information in due course.

The airline is estimated to have earned Sh3 billion from the deal that is expected to go into offsetting the carrier’s heavy debt load.

Slots at Heathrow lose value as the day progresses, with early morning arrivals fetching the highest value. The value of slots drops by 30 per cent by midday and by 50 per cent by evening, according to an earlier report by Heathrow Airport Holdings.

This means if an early morning slot is valued at Sh10 billion, a midday slot would fetch Sh7 billion and Sh5 billion for the same slot in the evening.

KQ last month announced that it had changed its flight schedule on the Nairobi-London route as part of its cost-cutting strategy but fell short of disclosing any information about the sale of the prime landing slot.