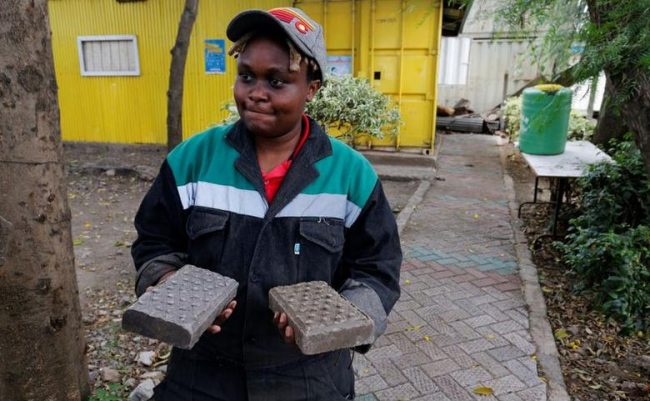 A Kenyan woman has attracted global attention after her creative project of recycling plastic waste into building bricks went viral.

Nzambi Matee, the founder of Gjenge Makers factory, says the bricks are stronger than concrete.

“Our product is almost five to seven times stronger than concrete,” she told Reuters in February.

In a recent interview with American broadcaster CBS, the young entrepreneur revealed that her main motivation to venture into the project was to deal with pollution of the environment.

The plastic materials end up in Dandora.

Through her project, Matee hopes to reduce the plastic mountain in Dandora.

She also collects plastic materials floating on rivers in Nairobi.

“I get excited when I see waste,” the materials scientist told CBS News correspondent Debora Patta, “because I know that’s life for us.”

The entrepreneur explained that it wasn’t easy for her to figure out whether she really could turn the waste material into useable building bricks.

When it finally worked, “that was the best day ever,” the woman who likes to get her hands dirty told Patta.

“It took us about nine months just to make one brick.”

One brick wasn’t enough she built a machine to mass-produce the plastic bricks.

Currently, Matee’s bricks are only being used for pathways in small households, but she wants to target big construction companies.

Reacting to a proposed trade deal that will see the US ship plastic waste to Kenya, Matee concurred with Greenpeace activist Amos Wemanya that countries should keep their waste.

Two years ago, the U.S. exported more than one billion pounds of plastic waste to 96 nations, including Kenya.

“It would be importing more problems if we were to allow this U.S.-Kenya trade deal to be used as a way of dumping plastic waste on the African continent,” the activist told CBS News.

Matee is optimistic that if supported, her work will help the country deal with the plastic menace and protect the environment from pollution.

“The more we recycle the plastic, the more we produce affordable housing… the more we created more employment for the youth,” she said.