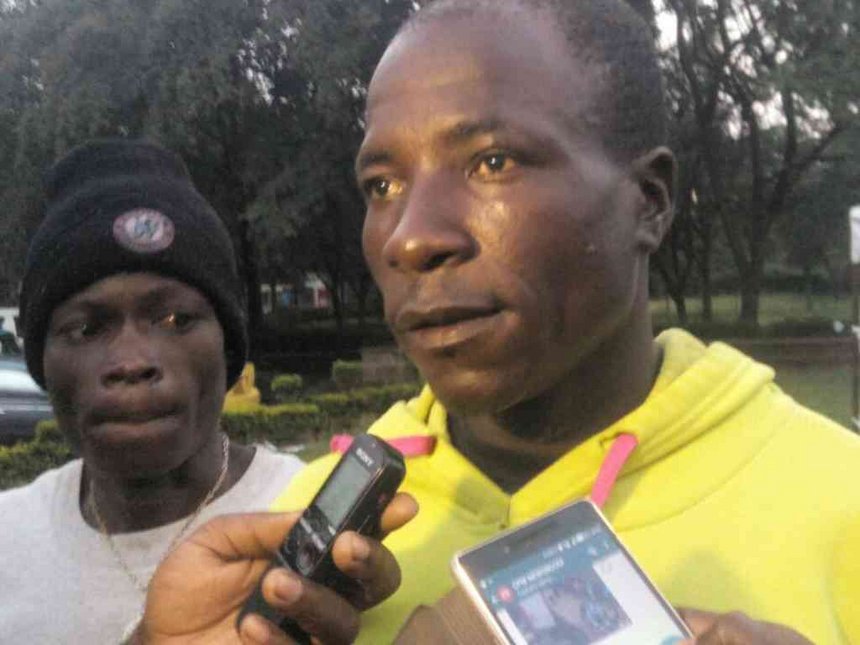 Kisumu resident Duncan Otieno speaks to journalists on the problem he encountered when he went to vote at a polling station in Kisumu, August 8, 2017. /FAITH MATETE

The machines cannot detect voters’ finger prints at these streams but the election process is smooth in the others.

Technicians were called to inspect and repair them as voters, who arrived as early as 3am on Tuesday, waited to select politicians who will lead them for the next five years.

“I came early to vote and go back home to carry on with my regular duties. This is disappointing,” said resident John Opiyo.

A section of Kisumu residents were told their names were not in the register which they said had names of people from other counties.

Susan Atieno who arrived at about 3am with her baby, could not vote as several attempts to find her name failed.

“They have told me my name was not included in the registration list and that I cannot vote but they have not given me the way forward yet I have all the required documents.”

She added that she also underwent the voter verification process.

Nicholas Omondi also experienced this while Duncan Otieno said he was listed as a Laikipia county voter.

In Gatundu town, touts let voters only into vehicles plying the Gatundu-Nairobi route.

Touts at the main stage requested every commuter to show a marked finger as proof.

Commuters welcomed the move and praised the conductors for pushing people to vote.

“Yes, don’t let in anyone who has not voted,” one said.

The transports however said they will not force anyone to vote and that they would ferry those on their way to polling stations.

“Someone just cracked a joke that everyone one travelling from the town should have voted and passengers endorsed the move,” said a conductor who did not want to be named.

The matter was later resolved.

At Mtsara wa Tsatsu Primary School polling station two, voting has not started yet and the system only shows a list of about 20 people, who are reportedly not registered there.

According to the presiding officer, the list of voters used during training indicated the station has 502 voters.

The school is in Ganze constituency, Kilifi county,

Voting at one of the streams at Nyakegogi Primary School in Kisii’s Bobasi constituency also failed to take off after the ballot box for woman representative was found to have the wrong title.

Kisumu resident Duncan Otieno speaks to journalists on the problem he encountered when he went to vote at a polling station in Kisumu, August 8, 2017. /FAITH MATETE Kenya Decides: Missing names, KIEMS ‘total failure’ in parts of Kisumu Voters at Rabuor polling centre in Nyando subcounty, Kisumu, are disappointed following the “total failure” of