Long lines of voters snaked outside of polling stations around the country, many of them camping out from before midnight, under heavy security.

Voting got underway shortly after 6am and all eyes are on an electronic voter identification and tallying system whose success is seen as crucial to a smooth election.

In Nairobi’s largest slum Kibera, an opposition stronghold, angry shouts rang out due to a 15 minute delay, but calm swiftly returned as polling stations opened.

“I voted Raila, because he will be so much better to us. But if he does not win, it’s ok. It’s a democracy after all. Really, there’s no need for violence,” said Tom Mboya, 43, who works in construction.

Tensions soared in the last days of the campaign with the murder of a top election official and opposition claims that one of its vote tallying centres was raided by police, heightening a feverish atmosphere of conspiracy and suspicion.

The polls are seen as a litmus test of Kenya’s progress since a disputed 2007 election sparked violence which left more than 1,100 dead and 600,000 displaced. 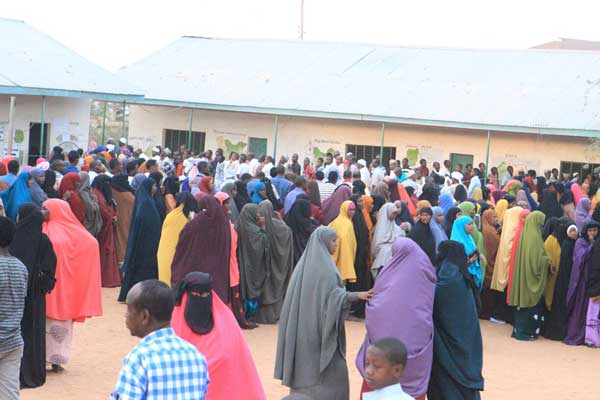 Odinga, 72, flagbearer of the NASA coalition, is taking his fourth and likely final stab at the presidency.

He claims elections in 2007 and 2013 were stolen from him and right up until the eve of the vote, insisted that Kenyatta’s Jubilee Party planned to rig Tuesday’s presidential election.

Elections in 2013 were marred by the widespread failure of the electronic system, forcing officials to revert to manual counting of the vote. However Odinga took his grievances to the courts instead of the streets, where he lost.

“It seems almost inevitable that whoever loses will question the result. The question is not whether or not they will accept the result but what they will do when they don’t accept it,” said Nic Cheeseman, professor of African politics at Birmingham University in England.

In a bid to ease tensions Kenyatta addressed the nation Monday night, urging citizens to vote “in peace”.

Former US president Barack Obama, whose father was born in Kenya, led a chorus of international calls on the eve of the vote for a peaceful election.

“I urge Kenyan leaders to reject violence and incitement; respect the will of the people,” Obama said in a statement.

“Everyone has a right to vote and we should all be ready to accept the results. There is no need to fight because of elections. We are all Kenyans irrespective of tribe. If we fight, will any of the candidates come to bring us food in our houses?” he said.

In Kenyatta’s home town Gatundu, north of Nairobi, a voter who identified herself only as Gathoni arrived early to “vote for my favourite president”, who will himself cast his ballot at the polling station later in the morning.

There are more than 19 million registered voters in the nation of 48 million. Half are aged under 35.

More than 150,000 security forces — including wildlife, prison and forestry officers — have been deployed for the vote, which ends at 5pm (1400 GMT).

However all eyes are on what is set to be the last showdown of a dynastic rivalry that has lasted more than half a century since the presidential candidates’ fathers Jomo Kenyatta and Jaramogi Odinga went from allies in the struggle for independence to bitter rivals.

The men belong to two of the country’s main ethnic groups, Kenyatta from the Kikuyu, the largest, and Odinga from the Luo.

Both have secured formidable alliances with other influential communities in a country where voting takes place largely along tribal lines.

Kenyatta, 55, is seeking re-election after a first term in which he oversaw a massive infrastructure drive and steady economic growth of more than five percent.

However he is also criticised for soaring food prices — with prices jumping 20 percent year-on-year in May — and massive corruption scandals on his watch.