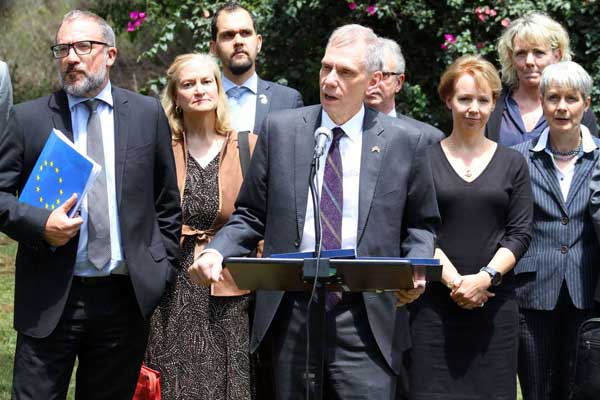 US ambassador to Kenya Robert Godec with other envoys addressing journalists at a past event. Twelve Jubilee MPs have written to foreign envoys over the political crisis in Kenya. PHOTO | DENNIS ONSONGO | NATION MEDIA GROUP

A section of Jubilee MPs have asked the international community not to support interventions to end the current political impasse outside the limits set by the Constitution.

In a letter to representatives of the European Union, its member states, Britain, the United Nations, the United States of America, the African Union and African countries, the 12 MPs asked the envoys not to believe the insinuation that there is going to be a constitutional crisis.

They said the announcement by National Super Alliance presidential candidate Raila Odinga that he had withdrawn from the October 26 election was meant to avoid a loss and to cause instability.

“We respectfully ask you, as our international partners, not to be party to this subversion of Kenya’s constitutional order, at the very least.

“However, we wish you went further and called wrong that which is wrong, by demanding that Raila Odinga stop grandstanding and trying to subvert the law to achieve his own personal and selfish political needs,” the MPs said in the letter.

The MPs told the envoys that the opposition prefers to have the current political uncertainty and confusion.

“In withdrawing and then calling for heightened violent mass protests and then travelling to capitals of devolved countries, Raila Odinga seeks to manipulate the international community into pushing Kenya into discussions on extra-constitutional solutions to the problems that he is deliberately creating, to benefit him,” the MPs said.

The MPs said they had signed the letter in their personal capacities as MPs.

The lawmakers were also critical of the opposition leader for coming up with “irreducible minimums” for the electoral commission in order to allow a repeat of the election.

“In making these demands, Raila Odinga does not seek to reform the electoral process in Kenya. What he seeks is to force administrative changes to the management of the IEBC,” they said in the letter.

Western envoys have been particularly keen to have an end to the political impasse.

Last week, they asked the main political players to drop their hardline stances and threatened to impose sanctions on those on either side who insist on not having a solution to the problem.

Jubilee MPs write to foreign envoys over Nasa Reviewed by samrack on October 12, 2017 .