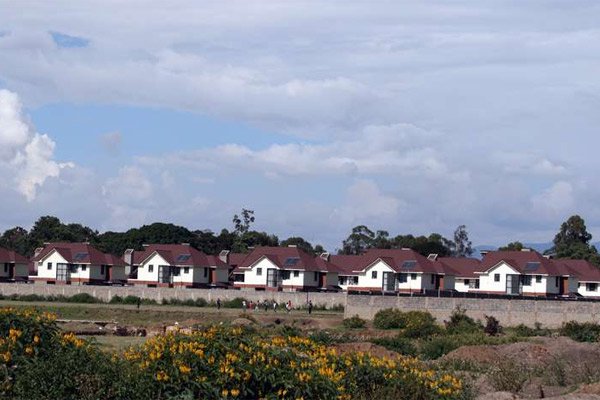 An upcoming estate on the outskirts of Nanyuki in Laikipia County; and below, Thuo Investment Group of Companies ChairmanJoseph Njoroge with the plans of the houses the company wants to build in the county.

The face of Laikipia County, which has long been dominated by ranches, conservancies, and pastureland, is changing fast as investors turn it into a real estate and holiday destination.

In the recent past, they put up multimillion-shilling houses, shopping malls and hospitality institutions.

The county, parts of which are  semi-arid, has also become a favourite  for individuals, cooperative societies and land buying companies, which buy land either to settle their members or for speculation, a move that have seen land prices shoot up.

Those who own small pieces of land have also started selling them following the entry of foreign investors, who are offering attractive prices, ranging from Sh300,000 to Sh3 million and above for an acre, depending on the location.

A number of big players have already camped in the area, attracted by the availability of huge chunks of land that can accommodate mega housing and holiday projects.

Thuo Investment Group of Companies, for instance, is planning a 600-acre gated community estate about 33 kilometres from Nanyuki Town.

The company’s chairman, Mr Joseph Njoroge, says the project will comprise 400 modern-lifestyle units, each on a one-acre plot. They  comprise  two-, three- and four-bedroom bungalows, which will be going for Sh4.5 million, 5.5 million and Sh7.5 million each respectively.

The estate, which borders Ol Pejeta Conservancy, will also have conference halls, playgrounds and a stone perimeter wall.

The company has more than 5,000 acres along the Nanyuki-Rumuruti Road, part of  which it is selling to non-members at Sh280,000 per acre.

Mr Njoroge said buyers can select house designs at the company’s office. This is to ensure that the development is controlled but within means of their clients as the company, which had hitherto focused on land buying and selling, ventures into housing.

Last year Laikipia Governor Joshua Irungu was  quoted as saying that the region has great  potential to create jobs and wealth and improve the livelihoods of the local people, but noted that this could be achieved  only by bringing on board local and international investors in the county.

This has seen many land buying companies flock to the area as they seek to make the most of the booming property business. However, this  has come with its fair share of challenges.

Last month, for instance, the Ethics and Anti-Corruption Commission moved to probe the dealings of four  land buying companies that operate on the  outskirts of Nanyuki Town following claims that their directors had been involved in dubious deals that had seen shareholders lose millions of shillings.

Investors flocking into Laikipia drawn by huge chunks of land Reviewed by samrack on September 14, 2016 .

Share thisFacebookTwitterPinterestEmailWhatsAppAn upcoming estate on the outskirts of Nanyuki in Laikipia County; and below, Thuo Investment Group of Companies ChairmanJoseph Njoroge with the plans of the houses the company wants to build in the county. Investors flocking into Laikipia drawn by huge chunks of land The face of Laikipia County, which has long been dominated