In medicine, Kenyan immigrant to Lowell ‘found a reason to keep going’ (VIDEO) 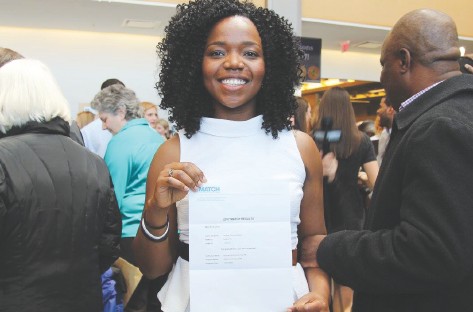 Chioma Okwara’s journey began while she was still living in Kenya, when her 9-year-old brother was in a car accident and died due to lack of medical care. It accelerated when her parents brought her and her four remaining siblings to the United States in 2007, when she was 16 years old.“I didn’t choose medicine, it chose me,” said Okwara. “The hope that I can help others has sustained me.”Adjusting to the American education system was challenging, but with support during her undergraduate years at UMass Boston, Okwara realized her dream of entering UMass Medical School. Today she was elated that she will begin her internal medicine residency at Brigham & Women’s Hospital in Boston, her first choice.“I am so grateful,” was all she could utter amidst the shouts of joy from family and friends, including her dancing mother and beaming father. Pic Photo Courtesy Noreen Chioma Okwara

In medicine, Kenyan immigrant to Lowell ‘found a reason to keep going’ (VIDEO)

LOWELL — Noreen Chioma Okwara was a teenager in Mombasa, Kenya, when her 9-year-old brother died from injuries he suffered in a car accident because he didn’t get the medical care he needed.

From that time on, Okwara knew her life’s mission was to become a doctor.

“In medicine, I found a reason to keep going,” said Okwara, 27. “It was this hope that there was something I could do about it, that I could keep someone from going through what I went through. That hope is what kind of propelled me towards medicine.”

A couple years after the accident, her family of mixed Nigerian-Kenyan heritage immigrated to the U.S. Okwara was 17 when she landed in Lowell and began the long process of adjusting to a new life in a new place so distant in so many ways from everything she knew

Rather than enroll in high school, Okwara earned her GED, passed the SAT and was quickly accepted into Middlesex Community College. She took classes at MCC for a year before transferring to UMass Boston, where she earned her bachelor of science in biology in four years.

Okwara held multiple jobs to help pay for her schooling: restaurant hostess, therapeutic assistant at a longterm care facility and researcher at a UMass laboratory. Her work in phytoremediation, or using plant enzymes to break down environmental pollutants, became part of her thesis project.

After graduation, Okwara spent a year doing research at a higher level: at the National Institutes of Health in Bethesda, Maryland. She studied HIV immunoregulation under Dr.

Anthony Fauci, the lab’s principal investigator and “the voice of infectious disease in the U.S.,” Okwara said.

“It was an amazing, amazing time,” she said.

Okwara said she learned a lot from him and the other “amazing minds” she worked with scientifically, but what stuck with her most was their patience and dedication to the cause. Research can be thankless work, especially when you don’t see results right away, she said.

Okwara returned to Massachusetts to attend UMass Medical School in Worcester, and is due to graduate in June with her doctor of medicine.

During both her undergraduate and medical education, Okwara was a recipient of the Charles D. Baker II Scholarship, created by now Gov. Charlie Baker in honor of his grandfather. The elder Baker never had the opportunity to pursue higher education, but ensured each of his children did. The scholarship is awarded on need and merit to outstanding UMass students who, like the elder Baker, “approached each day and each challenge with persistence, optimism and grace” in the face of hardship.

On March 7, Okwara attended UMass President Marty Meehan’s “State of the University” address at the UMass Club in Boston. She said she assumed invitations were sent to students at random, and hadn’t planned to go until she received some gentle urging from Meehan’s office.

Much to her surprise, Meehan called Okwara out as an example of the talent and perseverance of UMass students and alumni.

On Friday, March 17 at UMass Medical School — “Match Day” — Okwara learned where she would head on the next leg of her journey: residency.

Okwara had applied to multiple internal-medicine residency programs at hospitals and universities around the country. She interviewed at 18 places, flying to locations as far as Texas, Illinois, Minnesota, Pennsylvania and Georgia.

While her classmates were in a tizzy of nervous anticipation, Okwara remained mostly calm. She told herself that no matter where she ended up, she would give it her best.

“I always kind of believed God leads me to the places I need to be,” Okwara said.

She was overcome with joy when she opened her envelope and discovered she was placed at Brigham and Women’s Hospital in Boston. It was in her top three choices, but she never thought she’d get into the highly competitive program, one of the best in the country.

“I’m going to be working with some of the brightest minds in medicine,” Okwara said, noting the preparation she’s now undertaking. “It’s going to be a great opportunity to learn a lot of things, but I also know it will be challenging.”

In medicine, Kenyan immigrant to Lowell ‘found a reason to keep going’ (VIDEO) Reviewed by samrack on April 1, 2017 .

Share thisFacebookTwitterPinterestEmailWhatsAppChioma Okwara’s journey began while she was still living in Kenya, when her 9-year-old brother was in a car accident and died due to lack of medical care. It accelerated when her parents brought her and her four remaining siblings to the United States in 2007, when she was 16 years old.“I didn’t choose