by samrack
in Africa, Development, East African Community, Kenya, LAPSSET, News
A A
0

He said the new port – which is part of the Lamu Port Southern Sudan-Ethiopia Transport (LAPSSET) Corridor project – will provide an opportunity for the exploitation of the country’s maritime resources.

The President spoke today at Kenyatta International Conference Centre when he opened Kenya’s very first National Maritime Conference. The conference was convened to discuss and develop a national action plan on how Kenyans can benefit from the country’s maritime resources.

Saying special focus must be put on training so that the country’s maritime skills match the infrastructure being developed to exploit maritime resources, President Kenyatta disclosed that a public university will soon start to offer training in maritime studies.

The President gave a hint where the training will be when he said: “The Vice- Chancellor of Jomo Kenyatta University of Agriculture and Technology is here and this is an indication of where we are headed.”

He asked Transport, Labour, Education and the National Treasury Cabinet Secretaries to put in place measures that will ensure the country’s youth are equipped with skills that will enable them to take advantage of the maritime industry.

“We are as keen to develop our people’s skills as we are to build the infrastructure that supports them,” President Kenyatta said.

Noting that Kenya’s maritime domain which extends over 230,000 square kilometres – the equivalent of about 31 of the country’s 47 counties – has not been fully tapped by Kenyans, President Kenyatta said this potential can no longer be ignored.

President Kenyatta emphasised the need for closer cooperation, and effective co-ordination of maritime policy at the different decision-making levels – national, regional or continental. 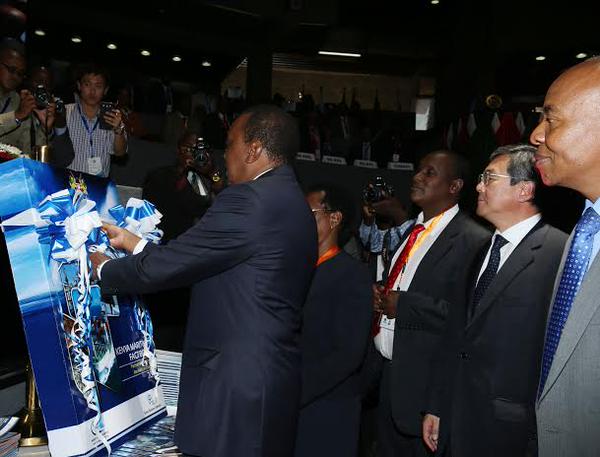 He said Kenya has begun to realise the vision of the African Union with its huge investments in port, road and rail infrastructure development whose aim is the seamless flow of cargo.

“This fear has locked Kenyans out of many opportunities. The time has come for us to remove the sunglasses and face the water,” the Cabinet Secretary said.

He said Africa has huge potential in maritime development and IMO is ready to help African countries’ action plans.

Mr Semizu added that IMO will work with the UNDP and other UN organizations to ensure support for African countries. He asked Kenya to draft a maritime policy in order to exploit the benefits of the ‘blue economy.’

Mr Semizu is at the tail-end of his term in office. Kenya’s Juvenal Shiundu, a senior IMO official, is a candidate to replace him.