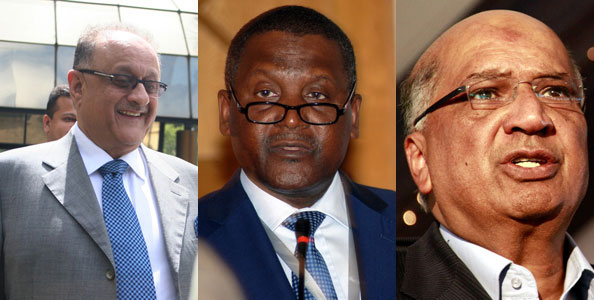 From left: Deepak Kamani, Aliko Dangote and Naushad Merali. Industry data shows that processors of fresh milk can expect gross margins of between 15 per cent and 20 per cent. PHOTOS | FILE

Billionaire investors are queuing to pump big money into Kenya’s dairy industry, attracted by a rapidly expanding market whose size is expected to more than double in the next 10 years.

Deepak Kamani, the chairman of conglomerate Zuri Group and the man at the centre of long-running Anglo-Leasing financial scam, is the latest deep-pocketed investor to target the dairy market with plans to build a fresh and powdered milk plant in Nyahururu.

Mr Kamani follows in the footsteps of Africa’s richest man Aliko Dangote of Nigeria who has announced plans to set up a factory in Kenya to produce dry milk for local and export markets.

The upcoming ventures are expected to intensify competition in a sector that is dominated by Brookside Dairies — the country’s largest milk processor that is controlled by the Kenyatta family — which has been tightening its grip of the sector with a series of acquisitions in the past five years.

French food group Danone last year acquired a 40 per cent stake in Brookside and announced plans to help the company expand its product portfolio and reach in East Africa.

Rising interest in the processed milk business is seen as preparing the players for an anticipated leap in demand for the commodity, driven by rapid urbanisation, population and incomes growth.

Milk processing also presents big businesses with the option of diversifying into one of the most lucrative fast moving consumer goods market that remains dominated by the informal traders.

Bobby Kamani, the CEO of Zuri Group, said his company’s decision to go into milk processing is informed by the quest to diversify from its core activities in the hospitality, floriculture and real estate development sectors.

Industry data shows that processors of fresh milk can expect gross margins of between 15 per cent and 20 per cent.

Major dairy firms like Brookside and New Kenya Co-operative Creameries (KCC) make a net profit of at least Sh13 from every litre of milk they buy from farmers at Sh38.

Wholesale prices stand at an average of Sh88 per litre, taking retail prices to Sh96 per litre after the retailers have added their trading margins.

Farm gate prices of milk have risen recently to about Sh40 per litre in the wake of persistent dry weather in producer areas such as Nyandarua.

“The market has reacted, within the realms of the supply and demand curve, causing an upshot in retail prices,” John Gethi, the general manager at Brookside, said in a statement.

This means dairy firms make the most money during rainy seasons when the processors operate higher margins after forcing farmers to cut prices significantly.

“Kenya is a volume-driven market and bigger players take the larger margins,” Mr Sigei said, adding that while fresh milk is the most popular dairy product, others like fermented milk and yoghurt trade with the highest margins of up to 30 per cent.

Official statistics show that packaged milk consumption rises and falls in step with the performance of the broader economy, highlighting the fact that rich and middle-income households in urban areas are the major targets of dairy firms.

Intake of processed milk hit a low of 398.5 million litres in 2008 when the combination of post-election violence and the global financial crisis saw a major reduction in spending by companies and households.

The fall in aggregate demand came amidst business disruption, deep uncertainty, and massive job losses that slowed economic growth to a paltry 1.7 per cent.

The 2008 annual growth rate of 1.7 per cent represented a deep plunge from the previous year’s 7.1 per cent that pushed the intake of processed milk to an all-time high of 423 million litres at the time.

The majority of Kenyans, however, still buy raw milk from farmers or middle men who hawk the product at much lower prices.

Increased urbanisation and higher economic growth are expected to grow the ranks of the population with the financial muscle to consume packaged dairy products, an outlook that is attracting new investments to the sector.

Mr Bobby Kamani said Zuri was undertaking feasibility studies with the help of Dutch consultants to guide its entry in the dairy market.

Details of the plan, including capital expenditure, production capacity, and expected date of commissioning the Nyahururu plant, will emerge from the market research.

Nigeria-based Dangote Group is working on similar details ahead of its expected entry into the local dairy business.

Brookside, which produces fresh milk and yoghurt, is set to expand its products and regional presence after the deal with Danone.

The firm, which has built up an estimated 40 per cent market share after a string of acquisitions, is the largest dairy firm with annual sales of Sh15 billion.

While rising incomes are expected to boost demand for dairy products across the board, the entry of more players is expected to increase competition that will see firms leverage pricing and product quality to gain market share.

Other big players in the dairy market are Githunguri Dairy Farmers Co-operative and Sameer Group— headed by billionaire investor Naushad Merali — which acquired the Daima milk business from Adarsh Developers.

Investors plan to pour billions into dairy industry Reviewed by samrack on February 23, 2015 .

From left: Deepak Kamani, Aliko Dangote and Naushad Merali. Industry data shows that processors of fresh milk can expect gross margins of between 15 per cent and 20 per cent. PHOTOS | FILE  By VICTOR JUMA, vjuma@ke.nationmedia.com Deepak Kamani is the latest deep-pocketed investor to target the dairy market with plans to build a fresh and