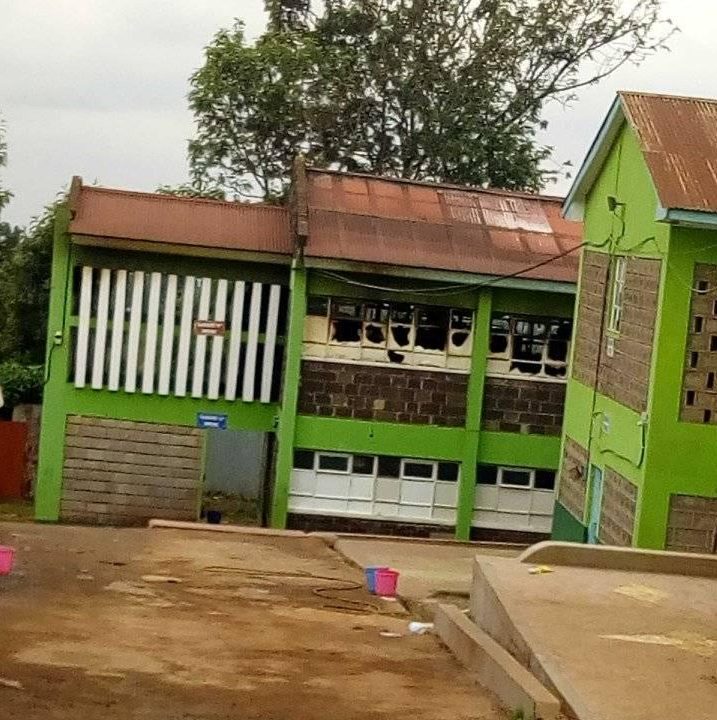 (Gachathi B Domitory burnt down) at Senior Chief Koinange High Schoool,kiambaa (County Ambulance had to come from all the way from Limuru)

Senior Chief Koinange Girls’ High School in Kiambaa, Kiambu County, has been closed indefinitely after a dormitory went up in flames on Tuesday morning, reducing belongings of 150 students to ashes.

The fire was reported to have broken out at around 5am, shortly after all the students had left for their morning preps.

The flames gutted the upper floor of the one-storey dorm.

Neighbours volunteered to put out the fire in an exercise that took close to two hours and according to witness, nothing was salvaged since the fire spread fast.

When the Nation team visited the school, fire was still smouldering in the dormitory, which had been partitioned in small cubicles.

The cause of the fire was not immediately established but the police, led by County Commander Adiel Nyange, visited the scene and started investigations

However, there were reports that some students were suspended on Monday after they were suspected of plotting a strike.

The school’s board of management refused to respond to the reports, saying they were not privy to the information.

According to student the Nation spoke to, the 10 Form Three girls were suspended and it was not clear if their plot had anything to do with the inferno.

After the fire the broke, the school management immediately sent a message to the parents asking them to collect the students.

“Dear Form 1 Harmony parents (sic), it’s unfortunate that fire has destroyed one of the dorms. The school management has made decision that the school has to be close. Please make arrangement to pick your daughters,” reads the SMS in part.

Professor Victoria Ngumi, who is the school’s BOM chairperson, said they had agreed to send the students home indefinitely to pave way for investigation as well as evaluate the damage.

Prof Ngumi, who is also the Jomo Kenyatta University of Agriculture and Technology Vice Chancellor, however, said investigations would be expedited to ensure the students are recalled as soon as possible considering Form Four exams will be done in two months’ time.

“As we speak, we have no idea why it burnt, but we have investigations going on and so as a board, we may not have answers as to what actually happened today (Tuesday) but we will be able to give them later… we have decided that for the safety of the girls, we close the school, but we will call them back once we know what happened,” she said.