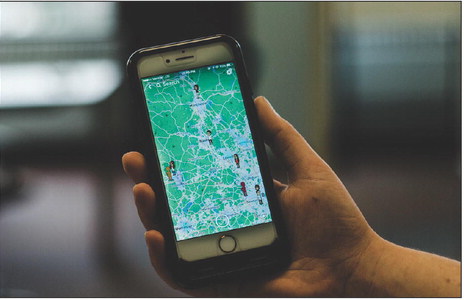 Snap Map allows locations to be seen: A new feature on Snapchat shows users where their friends are located on a map. SENTINEL & ENTERPRISE / ASHLEY GREEN

Snapchat’s most recent update makes it easy to find friends on a digital map, but the new feature is drawing words of caution from local law enforcement officials and privacy advocates. “Snapchat is one of the most popular, if not the most popular, app for kids now,” said Officer

John Boucher of the Ashburnham Police Department. “To be able to geolocate children is where our concern comes in.”

Boucher works as a school resource officer for the Ashburnham-Westminster Regional School District. His department is one of several that have taken to Facebook to post warnings about the new feature, called Snap Map.

Snap Map is deactivated by default; users must choose to turn on the function for it to work. After individual users opt into Snap Map, they choose whether they want their location viewable by all their friends, a select group of them, or whether to go in “Ghost Mode,” a setting that when activated, lets them see where their friends are but keeps their own location private.

Rather than displaying a user’s movements in real time — like how a navigation app such as Google Maps would – in Snap Map, users’ location is logged and displayed only where a user last opened Snapchat.

Contrary to some recent reports, Snap Map is an optional feature that can be turned on or off at any time, and only mutual friends can see each other on the map.

A Snapchat spokesperson said in an email, “Snapchatters can choose exactly who they want to share their location with, if at all, and can change that setting at any time.

Caution urged for users of Snapchat app Reviewed by samrack on July 9, 2017 .

Snap Map allows locations to be seen: A new feature on Snapchat shows users where their friends are located on a map. SENTINEL & ENTERPRISE / ASHLEY GREEN Caution urged for users of Snapchat app Snapchat’s most recent update makes it easy to find friends on a digital map, but the new feature is drawing words