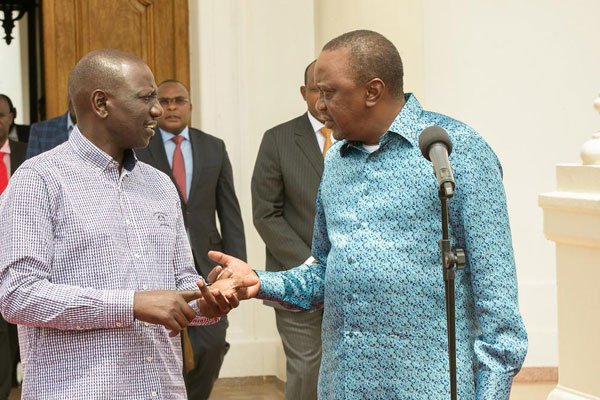 President Uhuru Kenyatta has forgotten what people like about him most; his charm, his youthful dash and his hi-five regular man on the street’s joy of life — what the French aptly call joie de vivre.

He and Deputy President William Ruto have recently undergone a troubling and deeply unpleasant change.

When they won the election in 2013, they seemed like joyous, if slightly narcissistic, twins.

Even their enemies had to concede; the two men were fun and gregarious. They charmed the country, including many who had not voted for them, into a grudging but fascinated admiration.

When President Kenyatta travelled abroad — which he did all too regularly — his eloquence, boyish enthusiasm and the occasional shuffle on the dance floor bewitched multitudes.

Lately, however, the President has been tactless, combative and without his characteristic charm.

His tirade against Mr Hassan Joho, the governor of Mombasa County, was symbolic of this new style: Over-the-board, unpresidential and nasty.

His constant exchanges with Mr Joho have given the governor more airtime than he deserves and bitterly incensed many Mombasa voters.

If Mr Joho’s approval ratings have soared, it is the President he should thank for it.

Why is he doing this? The most charitable view is that his poor record has out-ran his spin.

The SGR, light-bulbs-in-mud-huts, a laptop for every child and other ‘miracle cures’ that were supposed to lift Kenya into double-digit growth have not worked.

With the truth freed from the fiction, President Kenyatta’s storyline has collapsed.

FINANCIERS
That is one part of the story for the change in tone. I suspect something deeper: the impact of politics and economics on the fortunes of the President’s supporters.

Regimes in all democracies depend on two groups: campaign financiers and voters.

Given how opaque campaign financing in Kenya is, we do not know for certain who funded the Uhuru/Ruto campaigns, but if you work out who has benefited from Jubilee contracts, you can speculate intelligently.

Mr Uhuru Kenyatta on March 9, 2013 shows a certificate confirming him as Kenya’s new President-elect that he received from the Independent Electoral and Boundaries Commission (IEBC) at Bomas of Kenya in Nairobi. PHOTO | WILL BOASE AFP

First though, look a little closely at Mr Kenyatta’s voters. They were mainly the smallholder communities of Central and Eastern Kenya and the Rift Valley; coffee, tea, maize and dairy farmers.

Both financiers and voters expect pay-offs when their candidate wins. Peasant farmers in Mr Kenyatta’s base expected him to invest generously in smallholder agriculture.

Instead, most of the Government’s investment in agriculture has been in dubious, politically controversial large-scale projects – Galana-Kulalu, Hola and Bura — where both the local public and leaders have been mostly uncooperative.

That he has failed to assist his base has alienated the President from his supporters whilst his show investments elsewhere have gained him no new support.

On the other hand, the people who finance campaigns — the contractor and government supply elite — have blossomed, thanks to mega-projects and overblown procurements.

In honest environments, presidents pay off their campaign donors by making friendly policies.

In high impunity environments — like that of Kenya — financiers are paid through rigged contracts and hefty kick-backs.

This, it seems, must be what is driving corruption today. Regime financiers expect to recoup their campaign investments whilst leveraging even bigger contracts on the promise that they will fund future campaigns.

Only when we grasp that corruption is this embedded in the politics can we explain the impunity of Government departments: the frequent single-sourcing; the constant padding and revision of contracts already signed or the regular awards of tenders to friends and relatives the powerful.

READ: A frustrated Uhuru lashes out at anti-graft agencies

Kenya is now officially a “contractor democracy”. This too is a source of frustration.

The President is surely verbalising the inmost fears of those who have benefited most from his government. After all, they stand to lose their all if he does not win the next election.

Yet, by playing the frustrated Mr Hardball, Mr Kenyatta is painting himself into an unhappy corner, looking more like his deputy, Mr Ruto, than the Kenyatta who charmed the continent as Mr Cool.

Mr Kenyatta has never been the divisive person he now wants to be, Mr Ruto always was.

Mr Kenyatta has never been mired in personal scandals, Mr Ruto constantly is. The new Mr Kenyatta is frittering away his most valuable political asset, his genial personality.

If the President is needled by reminders that his government has fulfilled few of its overblown electoral promises, he should ask himself why that is so.

Unfortunately, he is not given to introspection. In moments of frustration, he is prone to outbursts and unguarded remarks.

In a State House function last year, ironically called to discuss governance, he played victim, charging that it was the duty of departments — not the presidency — to fight corruption.

It was a clear case of a chief executive shirking responsibility. During William Ntimama’s funeral, he tried, perhaps too insouciantly, to play on the ‘eating’ metaphor, miscuing it with the comment that whilst his opponents were scrambling for bones his supporters were feasting on the chops.

Instead of the bad joke that it might have been, the comment sounded like the brag of a privileged prince out of touch with the realities of his hungry subjects.

If this is what is frustrating the President, it is of his own making.

He has not fought corruption because his administration is beholden to corrupt insiders, not because he lacks constitutional authority, as his advisers often claim.

Instead of fixing governance — the country’s abiding problem – Mr Kenyatta squandered the post-election ‘honeymoon’ launching mega-projects designed to impress rather than benefit the people.

When he eventually stumbled, with his handling of the NYS scandal, he retreated into an echo chamber of self-serving advisors and internet incendiaries.

That he has such advisers is, again, the President’s fault.

He assumed, wrongly, that the advisers who helped him win the election were also the kind that he needed to govern.

Instead of scouting for the competent and the independent-minded, he hired a group of politically inept but internet-savvy advisors.

Some of them believed that their mastery of a medium — the internet — was proof of competence.

They messaged the President’s achievements by uploading palpable forgeries and silly conspiracy theories, feeding him fear rather than facts and judgment.

It is not a wonder, then, that Mr Kenyatta feels besieged. He sees his critics as his advisers do, mortal enemies.

By his lights, Kenya is doing fine; the Opposition is a bunch of wreckers and malcontents; human rights NGOs are the cat’s paw of imperialists and all he needs to do to win later this year, is to communicate clearly, the better to expose this evil alliance.

Yet, even if Mr Kenyatta had tried to do more, he would probably have failed.

His administration was too politically fragmented from the beginning to have been effective.

That fragmentation was shaped by the cynical bargain that he struck with his then political foe, Mr William Ruto to win in 2013.

He and Mr Ruto were united by adversity; the criminal charges that they were both facing at the International Criminal Court (ICC).

Unfortunately, their triumph at The Hague, when those charges failed, has exposed the fissures that the slick PR had hidden.

President Uhuru Kenyatta (right) and his Deputy William Ruto celebrate the formation of Jubilee Party on September 10, 2016 at Safaricom Stadium Kasarani. PHOTO | JEFF ANGOTE | NATION MEDIA GROUP
Mr Kenyatta and Mr Ruto are so temperamentally different. They would never have been allies but for their ICC ill fortune.

Mr Kenyatta is the debonair, high-born, bon vivant who had the kind of parents he needed to rise to the top.

Mr Ruto is the self-declared ‘hustler’ who clawed his murky way out of abject poverty and into high office.

Their supporters are historical antagonists. They are currently in a wary truce, not a delighted peace.

Mr Kenyatta may rhapsodise the founding fathers as much as he likes but the tensions between his base and that of Mr Ruto have their roots in the actions of the founders.

Those tensions did not abate merely because Mr Kenyatta and Mr Ruto both drunk from a bitter ICC cup.

It does not end there. Even as Mr Kenyatta’s running mate for 2017, Mr Ruto seems hell-bent on weakening the ticket.

Dogged by unsavoury gossip, he has become frisky and arrogant. Ostensibly a savvy politician, he has recently waded into an ill-advised defamation claim against activist Boniface Mwangi and a titillating paternity lawsuit, exposing both his official and personal conduct to exactly the kind of judicial scrutiny that most people would pay a fortune to avoid.

A more courageous Kenyatta would have dumped him for a more attractive choice for 2017.

But there are other dangers in Mr Kenyatta’s very angry and very public venting. Most immediate is the fact that it is polarising an already dangerously-divided country.

Both his base and his opponents are likely to respond to his intemperate outbursts with equally intemperate reactions.

The inevitable race-to-the-bottom as each side adopts ever more reckless and intransigent positions, will prime the country for an angry, uncompromising and even violent election.

Kenya has only held two peaceful elections of the seven polls and referenda it has held since 1990; the 2002 and 2013 elections.

It is no accident that no incumbent was running in either of the races and that the campaigns were so refreshingly free of bile and hyperventilating sycophants. It is surely time to learn.

Why Uhuru sounds frustrated: Lessons for August election Reviewed by samrack on April 1, 2017 .

Share thisFacebookTwitterPinterestEmailWhatsAppPresident Uhuru Kenyatta (right) and Deputy President William Ruto converse during the Jubilee Party National Executive Committee meeting at State House, Nairobi, on March 21, 2017. PHOTO | PSCU  Why Uhuru sounds frustrated: Lessons for August election President Uhuru Kenyatta has forgotten what people like about him most; his charm, his youthful dash and