US steps up Kenya focus with fresh layer of investments 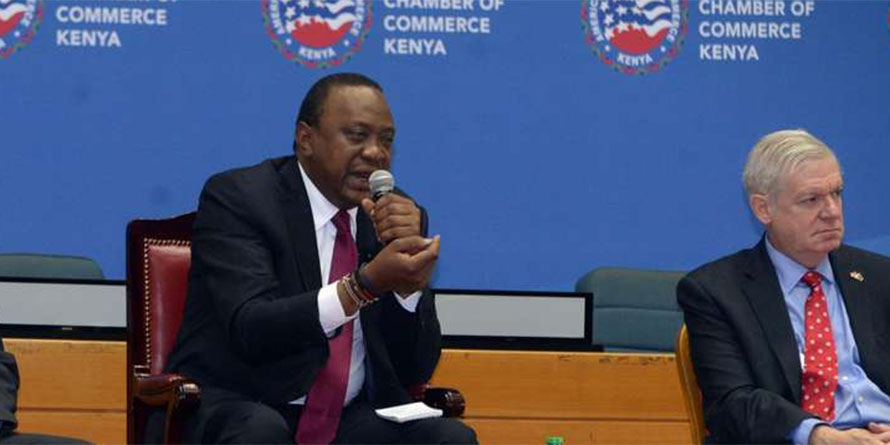 President Uhuru Kenyatta speaks during the America Chamber of Commerce Kenya Economic Summit at the United Nations Complex in Nairobi on June 28, 2018. Looking on is United States Under Secretary for International Trade at the United State Department of Commerce, Gilbert Kaplan. FILE PHOTO | NMG

US steps up Kenya focus with fresh layer of investments

Entries in the US business deal book in Kenya have in the past month increased rapidly, an indication of America’s renewed efforts to grow its financial and investment portfolio and influence in the East Africa nation amid intense rivalry from countries such as China.

On June 28, Kenyan officials led by President Uhuru Kenyatta witnessed deals worth Sh10 billion ($100 million) at a bilateral conference in Nairobi organised by the US Chamber of Commerce and attended by a 60-member American delegation led by the US Under-Secretary for Commerce, Gilbert Kaplan.

Among the deals at the June summit was an agreement between Kenya and an American company, Medtronic, to launch a dialysis centre for $20 million. Additionally, there were deals between Rendeavour and Unity Homes for the construction of 1,200 affordable homes in Tatu City, the US-backed, mixed-income development in Kiambu worth Sh4.5 billion ($45 million) and a Sh1 billion ($10) million credit line from World Business Capital, a global small and medium enterprise (SME) financier, to Victoria Commercial Bank, were signed.

Barely a month later, another delegation led by Ray Washburne, President and CEO of the Overseas Private Investment Corporation (Opic) — one of the US Government’s development finance institutions — was in Nairobi to discuss more investment opportunities and visit America-funded projects

“American businesses are eager to invest in Kenya and Opic is eager to support them” Mr Washburne said in a newspaper opinion published in the Business Daily ahead of his visit to Nairobi last week.

The Nairobi visit came a few weeks after Opic launched its Connect Africa initiative on July 2,2018 which targets to invest more than Sh100 billion ($1 billion) in projects that support transportation, communications, and value chains in Africa over the next three years.

Indicatively, President Trump’s Administration in its 2019 budget proposal stresses the need for the US Government to update its approach to development finance to help grow aspiring partners, promote economic relationships, and increase investment in regions important to American interests.

The President’s Budget proposes to consolidate multiple US development-finance functions into a new, stand-alone development finance institution (DFI) to help drive the US’ dealings, especially with developing countries.

“By consolidating and modernising the various US Government development finance functions, the United States will be better prepared to co-operate with allies like the United Kingdom, Germany, and Japan, and compete with countries like China by providing an alternative to State-directed investment in emerging markets” Mr Washburne said in a statement on June 26 after the US Senate Committee on Foreign Relations passed the Better Utilisation of Investments Leading to Development Act which seeks to create the new DFI.

But even as the consolidation is awaited, the US is keen on a speedy implementation of its Connect Africa initiative which is viewed by many analysts as counter-strategy to China’s Belt and Road Initiative which harbours massive geo-economic and political implications in Africa.

Unveiled in 2013, the Belt and Road Initiative targets to establish an extensive network of land and sea links with Central Asia, Africa, Europe, Southeast Asia and the Middle East.

“Africa is home to many of the world’s fastest-growing economies and presents both a great need for investment and a great opportunity for American businesses,” Mr Washburne said during the launch of the Connect Africa initiative in Washington.

“But, too many barriers remain to the flow of goods and services. By focusing on connectivity, we’re not only helping build means for economic development, but also laying the foundation for future trade partners.”

Kenya hopes to tap fresh opportunities under the Connect Africa initiative to bolster its growth.

“Opic is seeking to support the Nairobi-Mombasa Expressway Project in co-ordination with American engineering firm Bechtel. The project is critical to enhancing the strategic transportation infrastructure along the Nairobi-Mombasa corridor — a major corridor of national and regional commerce and integration” Mr Washburne said in his Op-Ed.

Projects already funded by Opic in Kenya include One Acre Fund which borrowed Sh1 billion in 2015 to expand its non-profit approach to serving small holder farmers, primarily women.

Google acted as the American sponsor for both Standard Bank of South Africa and Nedbank Limited to receive Sh6.3 billion each in 2015 for the 300-megawatt Lake Turkana wind power project.

Another Google-sponsored partner on the Lake Turkana Wind Power Project was eligible for Opic funding in 2014 because of a more than 25 per cent stake by an American investor, thus unlocking a Sh4.6 billion loan.

Educational company Bridge International Academy with widely publicised conflicts with the Kenyan Ministry of Education received Sh1 billion loan from Opic in 2013 for the construction and operation of low-cost private schools.

The Opic boss said unlike China, the US preferred to engage developing countries on non-rigid loan terms.

“And a global competition for influence is on. While I was in Asia, I saw how China’s Belt and Road Initiative is changing the political and economic landscape. The amount of investment China has planned for this initiative is staggering — aimed at interconnecting 65 percent of the world’s population, one-third of the world’s GDP, and a quarter of all goods and services,” Washburne said.

“Of course, a condition of many of these loans is that Chinese firms – and labour – get the business. And we know what happens when countries can’t pay. In December, for example, Sri Lanka gave control of a strategic port to Beijing for 99 years. This comes as China has been stepping up its presence in the Indian Ocean and its critical shipping lanes,” he told the US Senate Foreign Relations Committee on May 10. “We have to be engaged in the Developing World with a robust alternative to these State-directed investments, which can leave developing countries worse off”

Mr Washburne told the Business Daily that recipients of Opic loans benefit from low interest rates benchmarked off the 10-year US Treasury Note rate that fluctuates around 2.8 per cent as well as long loan repayment periods up to 30 years.

“There is less than one per cent default rate on Opic loans since inception in 1971. The impressive repayment rate is due in large part to the significant proportion of equity required by applicants to also put into projects along with the US Government Opic loan” he said.

In Kenya, debt to equity ratios on real estate projects, for example, can go even higher.

Mr Washburne said that Kenyan firms interested in Opic funding must have “a 25 per cent American nexus” that could come from an American CEO, investor, partner bank, owner, or supplier.

Given that more than 100,000 Kenyans reside in the US with many holding dual American citizenship, finding linkages for Kenyan firms to qualify for the 25 per cent American nexus requirement should prove easy.

US steps up Kenya focus with fresh layer of investments Reviewed by samrack on July 29, 2018 .

President Uhuru Kenyatta speaks during the America Chamber of Commerce Kenya Economic Summit at the United Nations Complex in Nairobi on June 28, 2018. Looking on is United States Under Secretary for International Trade at the United State Department of Commerce, Gilbert Kaplan. FILE PHOTO | NMG  US steps up Kenya focus with fresh layer