US calls for crackdown on S. Sudan war money invested in Kenya 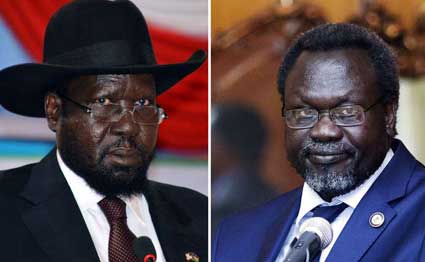 US calls for crackdown on S. Sudan war money invested in Kenya

The United States has urged Kenya to investigate properties and assets owned by elite families from South Sudan, including its president and his rival, who have enriched themselves in their country’s civil war raging since 2013.

Sigal Mandelker, the US Treasury’s under-secretary for terrorism and financial intelligence on a tour of east Africa, said South Sudanese, some of them on a sanctions list, have continued to invest illicit money in Kenya’s real estate market.

“I wanna be very clear, those who profit from human rights violations and corruption, preying on the poor and innocent and mothers and children, must heed our warning,” Mandelker told a press conference in Nairobi on Wednesday.

“We will impose consequences, we will cut off your access to the US financial system and we will work with our partners in this region and elsewhere to do the same,” she added, repeating a warning she had delivered earlier in the week in Uganda.

The political and military elite in South Sudan have been accused of corruption in hard-hitting reports by the US foundation The Sentry, co-founded by actor George Clooney.

A Sentry report points especially to President Salva Kiir and his former vice president Riek Machar, charging them with getting rich in the civil war by fighting to control the country’s oil and other abundant natural resources.

The Sentry, a non-governmental investigative unit, noted on Tuesday that in 2016 its analysts had publicly identified high-priced properties in both Kenya and Uganda acquired by South Sudanese involved in a civil war that has killed tens of thousands and pushed millions out of the country or to the brink of starvation.

These homes in exclusive Nairobi and Kampala neighbourhoods may have been bought with the proceeds of corruption, The Sentry said two years ago and repeated on Tuesday.

“What will it take for Kenyan and Ugandan officials to investigate and then seize houses and other assets determined to be the proceeds of corruption in order to apply desperately needed pressure on South Sudan’s peace spoilers?” the NGO asked.

Paul Malong, former chief of staff of the South Sudan army, maintains a $2 million mansion in the gated Nyari Estate, the group adds, noting that he was paid about $45,000 a year in his military leadership position.

The group’s contention that Kenyan and Ugandan authorities have failed to investigate possibly corrupt international dealings coincides with a visit to both countries this week by Mandelker.

Mandelker said she met with top officials in Kenya’s government and the banking sector to urge them to watch out for money laundering from South Sudan.

She asked them to ban South Sudanese who have been on a US black list since 2015 and to freeze their bank accounts and seize their properties.

“Corrupt money is not wanted here,” she said.

“Those who profit on of the backs of individuals who are devastated by human rights abuses will no longer have access to the international financial system because we will block that access, kick them out and we will work together to eliminate such despicable profiteering.”

The Treasury under-secretary urged officials in Nairobi and Kampala to close loopholes that allow transfer of illicit funds from South Sudan.

“We hope Under Secretary Mandelker’s engagement with Kenyan authorities and banks will spark official inquiries into real estate purchased by South Sudanese officials potentially to hide unexplained wealth obtained in the context of war,” John Prendergast, co-founder of The Sentry, said on Tuesday.

“Investigating, and if appropriate, seizing these homes would provide tremendous leverage for the peace process, and would be a critical step toward accountability for the systematic looting and mass atrocities committed since the country’s independence in 2011.”

Kenya and Uganda do have the legal tools needed to investigate the suspect real-estate transactions and, if warranted, to seize those properties, The Sentry says.

The group notes that information it had provided led Australian authorities to initiate the seizure earlier this year of a Melbourne home owned by former South Sudanese Gen James Hoth Mai.

The Sentry is urging the Kenyan government to “follow Australia’s model to investigate unexplained wealth.”

“With support from NGOs, domestic banks and US law enforcement, Kenya — East Africa’s banking capital and home to a large South Sudanese diaspora — is well-placed to take the lead in pursuing potentially corrupt assets,” The Sentry adds.

The US has previously sanctioned other South Sudanese said to be responsible for large-scale human right abuses.

South Sudan obtained its independence from Sudan in 2011 with essential support from Washington, who remains its principal donor.

But two years later the world’s youngest nation fell into civil war after Kiir accused his rival Machar of plotting a coup against him.

Violence — initially between ethnic Dinka supporters of Kiir and ethnic Nuer supporters of Machar — has since spread to other parts of the country, engulfing other ethnic groups. Numerous ceasefire agreements have been broken.

The war has claimed tens of thousands of lives, displaced nearly four million people, and provoked a catastrophic humanitarian crisis with the UN warning that 48 percent of the population were experiencing extreme hunger and seven million would need aid this year.

US calls for crackdown on S. Sudan war money invested in Kenya Reviewed by samrack on June 14, 2018 .

US calls for crackdown on S. Sudan war money invested in Kenya NAIROBI, The United States has urged Kenya to investigate properties and assets owned by elite families from South Sudan, including its president and his rival, who have enriched themselves in their country’s civil war raging since 2013. Sigal Mandelker, the US Treasury’s under-secretary