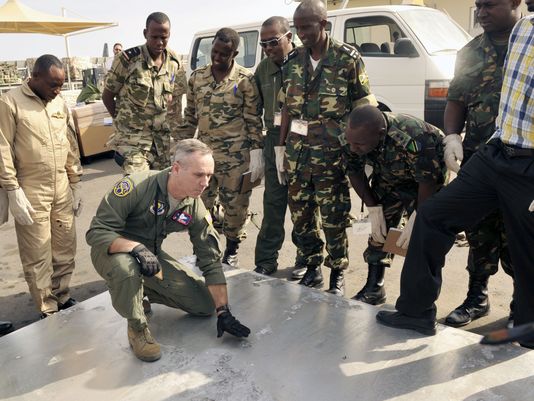 The Air Force on Monday begins training a variety of service members from African countries looking to boost their regional security. The militaries aren’t specifically out there to hunt down rebel leaders or run operations against extremist groups. But the training the African service members receive during the week-long program will likely aid their stability should conflicts arise.

“Terrorism is a hot topic everywhere, but the only time that would come up is in a discussion sense,” said Maj. Hartmut “Dirk” Casson, chief of African operations, U.S. Air Forces Europe-Air Forces Africa.

Roughly 200 U.S. and African airmen will be participating in the U.S. Air Force-led African Partnership Flight program hosted by Kenya this summer, and more regional nations could join in as well. A few U.S. Army personnel, Guard and Reserve, have also been invited to participate.

“If they take any of the training or lessons learned that we talk about and it makes them a better airman, and if they ultimately are in that situation [fighting terrorism], we would hope if anything happens, the region could work together toward solutions,” Casson told Air Force Times June 13. Casson has commanded a few APF programs.

In its fourth year, APF has held eight exercises: six on the African continent, one in Ramstein, Germany, and one in the United States, Casson said. The Air Force tries to do two events per year.

“We first do a survey to see what they can handle down there … and we invite regional countries around there, an additional five to seven countries,” Casson said. Through various classes, airmen discuss what their partners need to improve on before they can advise and assist. Each class has roughly 15 students from African nations, and 15 from the U.S.

Tanzania and Uganda are also participating in the annual exercise between June 20 to 28.

“We don’t spend the entire time in the classroom. We expect a hands-on approach solving issues, and getting a little dirty,” Casson added. “They come up with the course work, and we help them come up with solutions.”

At the participating countries’ request, the USAFE-AFAFRICA members fly down there to teach a few hundred military members better ways to boost their regional security. Each country’s request can vary.

“It’s based on the host nation and what they would like us to discuss,” Casson said. “Anything the Air Force is capable of doing…we’re open to. It can be a medical piece, it can be airfield ops, it can be flight procedures, so we’re really not limited.”

But this is not a typical air-to-air exercise where the Air Force flies with allied nations. The goal is to have the host nation or participating countries bring in their own aircraft if they should want to cooperate on enhancing their flight operations, Casson said. There are no U.S. aircraft participating this June.

In Kenya, for example, “they’ll be using their search and rescue helicopters,” he said.

“Kenya will be our first APF that has an exercise [meaning] … they will take what they learn in the classroom, what they practice, and then conduct the exercise,” Casson said. With the Air Force’s supervision, the Kenyan airmen will grade themselves on their performance.

The Air Force’s work will also include humanitarian programs across Kenya.

“We’ll have the USAFE band out there for outreach programs, [working] in orphanages … and we’re bringing our … medical teams, including dentistry,” Casson said.

The Air Force saw a need to do what its sister service branches were doing on the continent, and established the first APF in 2012 with an event in Ghana. After a pause in 2013 due to budget restrictions, the service hosted three more events in 2014 in Senegal, Angola and Mauritania. Last year, Djibouti hosted APF exercises.

“We saw this as an excellent way to engage in the region, and ultimately, their successors, as air forces grow in Africa, there’s going to be a need to work together,” Casson said. “This is our opportunity to build partnerships, not just with the militaries, but civilian populations and well beyond.”

Oriana Pawlyk covers deployments, cyber, Guard/Reserve, uniforms, physical training, crime and operations in the Middle East and Europe for Air Force Times. She was the Early Bird Brief editor in 2015