Fresh election gadgets to be bought for 2017, says Chiloba 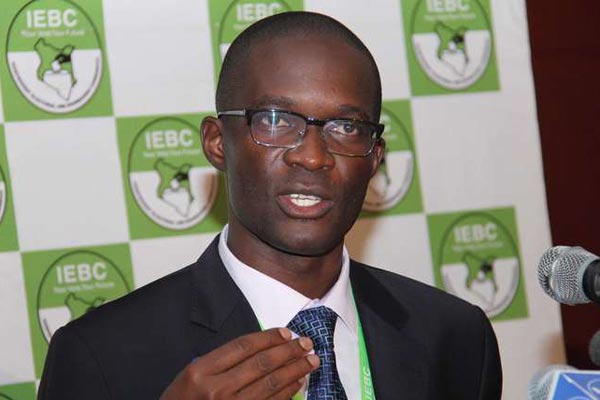 Independent Electoral and Boundaries Commission Chief Executive Ezra Chiloba. The electoral commission will have to procure new Electronic Voter Identification Devices ahead of the 2017 General Election as those used in 2013 would be technically obsolete. FILE PHOTO |  NATION MEDIA GROUP

The electoral commission will have to procure new Electronic Voter Identification Devices ahead of the 2017 General Election as those used in 2013 would be technically obsolete.

The gadgets that sparked controversy in the last elections were supplied by Face Technologies, a South African company, but the batteries of the 30,000 machines used to electronically identify voters on the election day had a three-year lifespan.

Electoral commission chief executive Ezra Chiloba confirmed there would have to be fresh procurement.

“We will have to look for money to acquire new devices for the next General Election. The ones procured will be obsolete by then because of the three-year battery lifespan,” he said.

Mr Chiloba said the alternative would be to procure new batteries for the gadgets but he cautioned that doing so could be technically difficult as the gadgets were designed and tailor-made for the commission.

Up to 34,000 devices may be required for the 2017 elections in order to facilitate faster voter identification in all the polling centres around the country.

Face Technologies supplied gadgets to the commission valued at US$16 million (about Sh1.5 billion) but the company later supplied additional kits leading to the varying of prices and a major dispute over payment between the commission and the supplier.

Though Face Technologies won the tender, the gadgets were manufactured by a re-contracted Chinese company.

It is due to the irregularities involved in acquiring of the Electronic Voter Identification Devices that top officials from the commission have been dragged to court to answer various anti-corruption and abuse-of-power charges relating to procurement.

Parliament has also opened fresh investigations into various procurement issues and is expected to deliver a report to the House in weeks.

“It should be noted that despite problems with procurement and the anticipated expiry of the batteries, the devices have worked well during all the by-elections conducted after the General Election,” said Mr Andrew Limo, an official at the commission.

The plan will also outline various electoral timelines with only two years left.

The commission is also planning to put in place an electronic document management system that will secure vital election documentation.

The system, which will entail use of scanners, will be used to wire documents, including crucial result sheets filled by officials, to the commission headquarters from the ground.

The manual handling of result sheets from various polling centres and constituency tallying centres has been previously abused by polls officials who make unauthorised amendments and return varied figures that spur controversies in electoral processes.

The electoral commission is also considering reviewing the forms and other documents used to file returns by introducing fool-proof security features to minimise fraud.

In November, the commission has made plans for national voter registration including making an appeal to various partners to support the initiative.

This month experts from the French company that supplied the Biometric Voter Registration kits, Safran Mopho, were in Kenya to conduct software update in readiness for the voter registration.

“They have visited twice in the last three months to provide technical support on software maintenance,” said Mr Chiloba.

He said the commission’s voter registration has been going on.

The November-December vote listing is not adequately funded though it is aimed at registering up to two million new voters.

The commission will only be able to deploy up to 3,000 Biometric Voter Registration kits.

This is because, according to Mr Chiloba, the resources available cannot afford a full-fledged deployment of all the kits available.

Video:Karatina School For The Mentally Challenged