The Future of Money 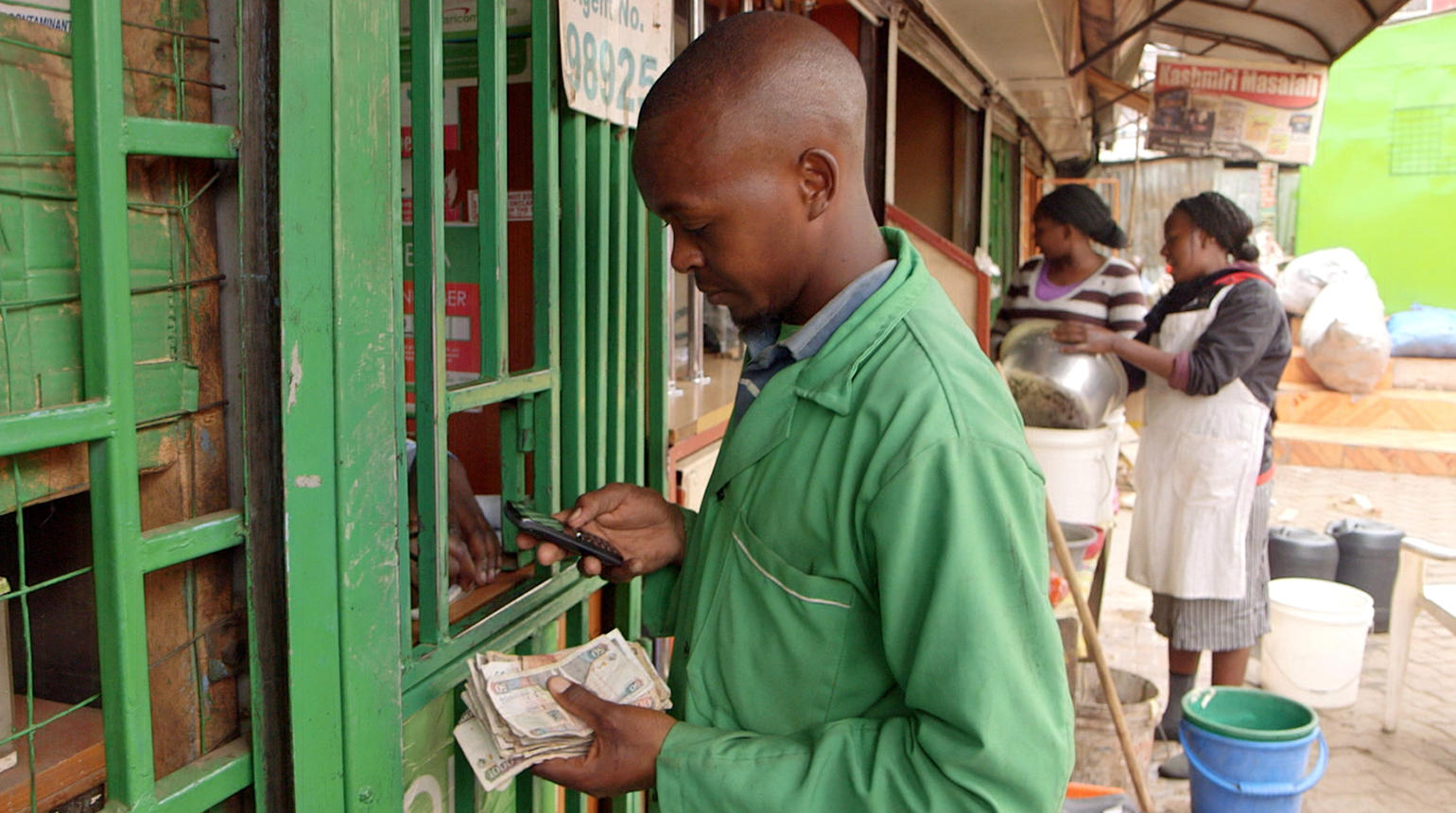 The Future of Money

A “mobile money” revolution has swept Kenya, where people can send and receive money on their cell phones. It’s improved commerce and brought basic necessities to poorer areas

The following is a script from “The Future of Money” which aired on Nov. 22, 2015 and was rebroadcast on May 29, 2016. Lesley Stahl is the correspondent. Shachar Bar-On and Alexandra Poolos, producers.

Tech giants like Apple and Google are all steadily rolling out new-fangled services to turn our smartphones into digital wallets — replacing cash and checks. It may seem cutting edge, but as we first reported in November, there’s one country that adopted mobile money years ago:

Here in the U.S., we can use smartphones to pay for things, but you typically need to be linked to a bank account or credit card. In Kenya, you don’t need a bank account, you don’t need a credit history, or very much money for that matter, making this country in East Africa a giant experimental laboratory defining the future of money.

At a bus station in Nairobi, buses were not only loaded with humans and cargo, but with cash. It used to be the only way for people working in the cities to get money to relatives back in their remote villages.

Bob Collymore: You give the cash to the bus driver, and then you say, “When you get up to the village in Kakamega — you will see someone at the crossroads. Give the money to him.” Guess what happens? The money evaporates.

Bob Collymore, the CEO of Kenya’s largest cell phone provider, Safaricom, says his company sought to solve the problem. While a majority of Kenyans don’t have a bank account, eight in 10 have access to a cell phone. So in 2007, Safaricom started offering a way to use that cell phone to send and receive cash. They call it M-PESA: m stands for “mobile;” “pesa” is money in Swahili.

Bob Collymore: It is often referred to as Kenya’s alternative currency. But safer and more secure.

“It is often referred to as Kenya’s alternative currency. But safer and more secure.”

Lesley Stahl: How sophisticated is the phone that you use for M-PESA? Is it a smartphone?

Bob Collymore: No, it’s the cheapest phone you can have. It was designed to work at the lowest level of technology.

To get this currency you go to an M-PESA kiosk. I give the agent 3,000 shillings — about $30 in cash, and she converts it to virtual currency on my account.

There are over 100,000 agents like her across Kenya, creating a giant grid of human ATMs. For most this is a side business: so a pharmacy will sell M-PESA or a roadside spice shop; this barber will give you a shave and M-PESA. And, yes, you can even buy M-PESA here.

Bob Collymore: This is bankless banking.

Lesley Stahl: You don’t need all those branches.

Scrolling down the options on the phone menu: you can send money, withdraw cash, pay a bill, or buy goods and services. And everyone uses a PIN number for security. But this is not like paying with your smartphone in the U.S., because our devices are linked to a bank account or credit card. Most Kenyans who use M-PESA don’t have a bank account: the phone is it.

Bob Collymore: Now you can spend that 3,000 shillings on anything!

Shopping in the name of journalism – I like this.

Lesley Stahl: Can I pay you in M-PESA?

Daniel: Yeah. Yeah. If you have it on the phone, just click the button and it goes.

Daniel says Kenyans use it for everything from taxis to taxes.

Lesley Stahl: Is it safer for you and for me to use M-PESA?

Lesley Stahl: So do you use M-PESA to buy gas for the car?

Lesley Stahl: Do you pay all your bills with M-PESA?

Daniel: Most of my bills. In fact, I rarely go to the bank nowadays.

At my destination, I tried using the phone money.

I typed in his mobile phone number, and the amount, the fare was 700 shillings, or $7.

Lesley Stahl: I’m going to give you a thousand.

Daniel: Your PIN number, yeah yeah. You have that?

Lesley Stahl: I have that. I have.

Daniel: Don’t tell me that.

Lesley Stahl: No, I’m not going to tell you.

Daniel: That is for your…top secret.

Lesley Stahl: OK, so what do I do now?

Anji: How are you?

Lesley Stahl: I’m great. I love these bags. How much is this one?

Next, I buy a bag at Anji’s curio shop with M-PESA.

Lesley Stahl: Do you use it a lot in the store?

Anji: Yeah. It’s like having bank in your pocket.

My shopping ended with animals. No! I’m not buying a giraffe, but you can use your phone to feed one.

Lesley Stahl: Am I giving you your dinner?

While most transactions here are still in cash, M-PESA is used by 23 million Kenyans — over 90 percent of the adults — from the well-heeled to the shoe shiner.

This technology was actually invented in England. But it is here in Kenya where innovation using M-PESA is taking off. We visited the iHub in Nairobi where local technology startups are inventing new ways to use mobile money.

Bob Collymore: And that mobile money system now acts as a terrific platform which a lot of other innovations has used as a springboard. And the new phrase around town is the Silicon Savannah.

We met Mary Tonkei, a Maasai dairy farmer, who sells milk in M-PESA, pays her farmhands in M-PESA, and even got a loan to buy more cows in M-PESA.

Lesley Stahl: And just a couple of buttons and then you buy a new cow?

Actually, Mary was able to buy two new cows. And she got a much better rate than she would’ve at a bank. Since the loan transaction was by phone, there was hardly any overhead.

Lesley Stahl: So it sounds like you’re rapidly increasing your business.

We were surprised at how much M-PESA has changed life for the poor. In a slum called Kanaani, south of Nairobi, we met a pig farmer, Stephen Wainaina Waweru. Before M-PESA, like most Kenyans, he had no electricity. He used to rely on a kerosene lamp for light:

It emitted toxic fumes, could cause fires, and at $200 a year, kerosene wasn’t cheap. But Stephen recently upgraded. He got solar power, and his first light bulb.

Stephen Wainaina Waweru: Yes. It lights the room all over.

Lesley Stahl: So where is the panel? Is it up here?

Stephen Wainaina Waweru: Yeah the panel is up there.

Lesley Stahl: Can you show it to me?

Stephen Wainaina Waweru: Yeah, I can. See, up. Lemme show you. Here it is!

The unit costs about $180 – less than kerosene but still out of Stephen’s price range for a single purchase.

But he paid only $35 upfront and then 40 cents a day in M-PESA for a year. And he never has to leave the farm: all he does is click his phone, which activates a chip attached to the panel to turn it on.

Lesley Stahl: When you’re finished paying it off–

Stephen Wainaina Waweru: It shall be mine. No more cost.

The solar panel has changed his life: he can tend to his pigs at night and his children can study indoors without breathing toxic kerosene fumes.

Past efforts to introduce solar panels to the slums failed, in part, because they were stolen. This has been solved because the same chip that turns the panel on can also disable it.

Lesley Stahl: So if you don’t pay up, they turn your lights off? They have the ability to turn ev-

Stephen Wainaina Waweru: These guys, they are excellent, Madame. Because once I don’t pay, they don’t have to come to me. The light just goes off!

Providing drinking water is another way M-PESA is making a difference. Nearly a third of Kenyans do not have access to clean water, often relying on a river or water trucked in by donkey.

But the village of Njogu-ini got a new pump for its well. Villagers pay for clean water by texting M-PESA to this meter box — which unlocks the pump. A villager can get a full month’s worth of water for around $6.

For decades, development advocates implored banks to open branches in remote places, but it made little business sense: nearly half of Kenyans live on just $2 a day or less. Their financial transactions were just too small.

Lesley Stahl: Now, how can that be viable for you as a company? It’s like they have no money.

Lesley Stahl: How much money annually does Safaricom make from M-PESA in Kenya?

Bob Collymore: A quarter of a billion dollars.

Lesley Stahl: A quarter of a billion dollars?

Bob Collymore: Yeah. You don’t have to be greedy to be successful.

And you can be successful if you don’t have to build thousands of branches, and pay thousands of tellers. Actually, when M-PESA started, Kenya’s commercial banks implored the government to impose regulations to impede its development, but the government decided to take a hands-off approach, which is pretty unusual.

Bob Collymore: The most effective barrier for the success of mobile money around the world is the banking lobby. The banking lobby in most parts of the world is a very strong lobby. And banks have looked at what’s happened in Kenya and have decided that they don’t want to see that happening in their own countries.

Lesley Stahl: “Not in my backyard,”

Bob Collymore: Exactly. The banking regulators have been persuaded that this is a threat to the banking industry.

Lesley Stahl: And it is, isn’t it?

Bob Collymore: Yes, it is.

Lesley Stahl: It is.

Bob Collymore: It is.

Lesley Stahl: And so the banking industry isn’t crazy.

Bob Collymore: No. No.

M-PESA does have drawbacks: there’re real concerns of criminal enterprises, scams and money laundering. And while it has been introduced in other countries like India, Egypt, Afghanistan and Romania – it has stubbornly refused to catch on as it has in Kenya. But the head of Safaricom thinks it’s just a matter of time.

Bob Collymore: Because mobile phones are becoming so much more ubiquitous. Every adult in the world will have a mobile phone. And if you have that tool in your hands, imagine the things you can do.

We found among the Kenyans we met that M-PESA is igniting a real sense of patriotism. Just ask my cab driver Daniel.

Daniel: It is one of the best things that has happened to our country. But that makes you feel proud! And now you feel you are Kenyan!

Lesley Stahl: Yeah, you think of Kenya you don’t think of high-tech.

Daniel: That tells you now in the new world order anything is possible.

One of America’s most recognized and experienced broadcast journalists, Lesley Stahl has been a 60 Minutes correspondent since 1991.

The Future of Money A “mobile money” revolution has swept Kenya, where people can send and receive money on their cell phones. It’s improved commerce and brought basic necessities to poorer areas The following is a script from “The Future of Money” which aired on Nov. 22, 2015 and was rebroadcast on May 29, 2016.