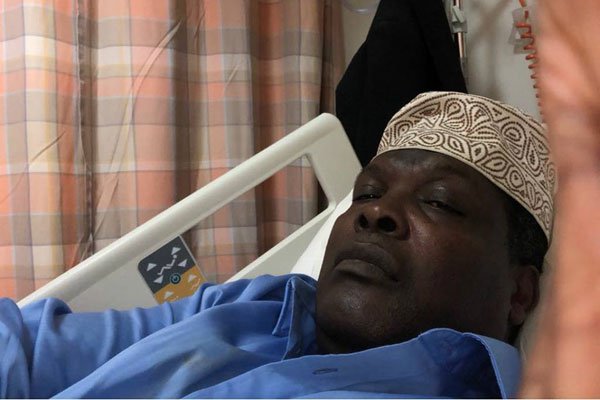 Lawyer and self-declared ‘general’ of the National Resistance Movement Miguna Miguna says he is “marooned” in Dubai and wants the government to deliver his Kenyan passport to him.

In a statement, Dr Miguna on Friday said he is still unwell after “police” and “state agents” injected him with “unknown chemicals”.

“I am in great pain, stress and inconvenience. My left hand is still badly swollen. I believe that Jubilee thugs had inserted an IV in it to keep me unconscious for the entire duration of the flight between Nairobi and Dubai,” he said.

“My left side is extremely painful. I’m yet to get toxicology tests done on the chemicals the state thugs violently and illegally injected me with on Tuesday evening.”

He reiterated that he would not leave United Arab Emirates for anywhere else but Kenya and asked to Interior Cabinet Secretary Fred Matiang’i and Immigration Principal Secretary Gordon Kihalang’wa to deliver his passport.

The Kenyan passport that Dr Miguna held was confiscated by the government and perforated, saying he acquired it illegally.

“I don’t have any travel document or passport,” he said.

“I need Kihalangwa and Matiang’i to deliver my Kenyan passport to me here in Dubai tomorrow, March 30, 2018, as multiple courts have ordered them to do, so that I can use it to travel to Nairobi immediately.”

He asked Dr Matiang’i, Mr Kihalangwa and Inspector-General Joseph Boinnet, who have since been fined Sh200,000 each for contempt, to comply with High Court orders and facilitate his unconditional return to Nairobi.

He insisted that he would return to Kenya after he is cleared by UAE.

“I’m waiting for clearance from the Emirates Air and UAE authorities and an air ticket back to Nairobi. I intend to fly back to Nairobi as soon as possible. It’s my birthright, constitutional and legal right as well,” he said.

“I will never waive my rights because an authoritarian and barbaric usurpers of power demand or expect that I do.”

The lawyer was kicked out of Kenya on Wednesday evening after a 72-hour standoff at Jomo Kenyatta International Airport in Nairobi.

The impasse was precipitated by his refusal to sign immigration papers and have his Canadian passport stamped.

First deported to Canada in February, Dr Miguna claims Kenyan and Canadian citizenship, but the government says he renounced his Kenyan birth right when he acquired his Canadian passport.

The High Court in Nairobi has ordered the government to facilitate his return from Toronto to take part in his citizenship case after the Court of Appeal rejected State’s request to have the orders suspended.

The Department of Immigration had on Tuesday issued application papers to Miguna to enable him start the process of enabling him regain his Kenyan citizenship as ordered by the courts, and to also facilitate his entry into the country after he refused to produce the Canadian passport he had used to travel back to Kenya.

But when the application documents were delivered to him in the presence of the Consular Officer of the Canadian High Commission to Kenya, Ms Fiona Jarvis, Dr Miguna refused to fill in the relevant details and sign the forms.

Instead, he tore the official documents and was denied entry.

The Kenya National Commission on Human Rights (KNCHR), which has been following up on the Miguna case because of a court order and will be filing a report in court, on Thursday said it was disappointed by some of the lawyer’s decisions.

“I was disappointed with Dr Miguna because the court order had allowed him to use his Canadian passport to gain entry into the country,” said KNCHR chairperson Kagwiria Mbogori.

“I had expected him at least to use it to gain entry into the country, and his refusal boggled us. There were some missteps on both sides.”

Share thisFacebookTwitterPinterestEmailWhatsAppStranded Miguna Miguna sends SOS to Matiang’i from Dubai Lawyer and self-declared ‘general’ of the National Resistance Movement Miguna Miguna says he is “marooned” in Dubai and wants the government to deliver his Kenyan passport to him. In a statement, Dr Miguna on Friday said he is still unwell after “police” and “state agents”