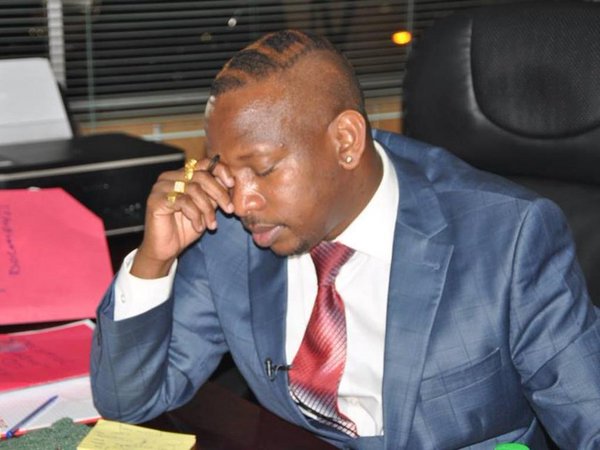 Jubilee MPs are said to be isolating Nairobi Senator Mike Sonko in his bid for governor in the 2017 general elections. FILE Photo.

In the clamour by Central Kenya to enthrone one of its own at City Hall,

Jubilee MPs are drumming up support for Waweru to face off with the incumbent Evans Kidero of ODM, in the 2017 general elections.

The politicians want to lock out Sonko, and former Starehe MP, Margaret Wanjiru , who ditched ODM in December 2014 for “perpetual mistreatment” by the party.

Wanjiru, who lost the 2013 bid for Nairobi governor, intends to run again on a TNA ticket.

Although Sonko enjoys support across the political divide, Jubilee MPs worry he could be rejected for governor due to his antics, and alleged fall-out with President Uhuru Kenyatta.

Read:  Sonko dismisses claims Uhuru will not support his race for Nairobi governor

But Sonko’s philanthropy has endeared him to the electorate, mainly youth, and women, who are the majority of voters.

Waweru declined to confirm favouritism by politicians sidelining his competitors.

“I will speak for myself and not my brother Sonko; I am a team leader and a team player, I am a man of integrity and you expect some level of maturity and somberness from a leader,” he said.

But Starehe MP aspirant Francis Mwangi said Waweru will not get a direct nomination by the Jubilee party. Instead, he will face off with Sonko and Wanjiru at the nominations.

“We are not concerned with an individual’s tribe. We are looking for a leader who can bring order to Nairobi and make it East Africa’s business hub,” Mwangi said.

He said Jubilee will nominate a candidate with management credentials.

Nairobi political stalwarts, including Starehe MP Maina Kamanda, are coalescing around Waweru to elbow out Sonko and Wanjiru.

The politicians have not been comfortable with Wanjiru, and are determined to ensure she does not clinch the party’s ticket.

They say Wanjiru is an intruder who wants to reap where she didn’t sow, and an opportunist who jumped from ODM after her political glory in the party became remote.

But Mwangi said: “The three are my personal friends and I can’t suggest any of them as the best, although, Waweru is a former bank manager.”

Sonko and Wanjiru have become lone rangers in city politics.

The Nairobi senator has taken a low political profile, while Wanjiru has been carrying out political activities behind the scenes.

The former MP has been reaching out to women, and youth through self-help groups. She has also been working with religious leaders among other lobby groups to expand her grassroots networks.

Sonko, Margaret Wanjiru isolated by Jubilee in race for Nairobi governor Reviewed by samrack on May 13, 2016 .

Jubilee MPs are said to be isolating Nairobi Senator Mike Sonko in his bid for governor in the 2017 general elections. FILE Photo. Sonko, Margaret Wanjiru isolated by Jubilee in race for Nairobi governor Senator Mike  Sonko’s bid for governor could be jeopardised by growing support for Dagoretti South MP Dennis Waweru. In the clamour by Central