Shabaab terrorist rented room next to city police base 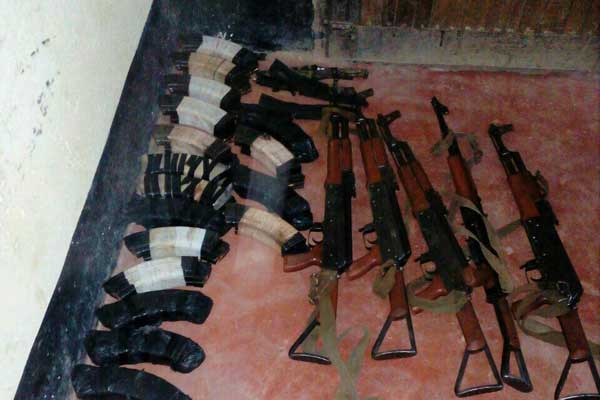 Some of the weapons recovered by police in Isiolo who foiled a major terrorist attack. Security officers in Nairobi were Monday evening piecing together details of a plot to bomb the city, and cordoned off a room in a prime city hotel. PHOTO | FRED MUKINDA | NATION MEDIA GROUP

Shabaab terrorist rented room next to city police base

Security officers in Nairobi were Monday evening piecing together details of a plot to bomb the city, and cordoned off a room in a prime city hotel where the would-be terrorists booked a room since the Friday of February 9 this year.

The terror plot was foiled by hawk-eyed police officers hundreds of kilometres away in Merti, Isiolo County on Thursday last week, but the possible scale of devastation in the city, and the gallantry of the officers in the dusty hamlet up north, are just emerging.

The details started flowing following the arrest in Merti of two men who were part of a group of five transporting a cache of weapons.

A police investigation revealed that one of the suspects had been booked into a hotel opposite the Central Police Station in Nairobi ten days earlier.

Abdimajit Adan, 24, was arrested alongside Mohammed Nane on Thursday after a brief exchange of fire. Police found five AK-47 assault rifles and 36 fully loaded magazines in their car.

A third suspect was killed at the scene.

Moments earlier members of the public had alerted police officers returning from a security patrol at Yamincha that they had spotted a car, registration number KBM 200D, hidden in a thicket.

“When we got there, one of the occupants in the vehicle came out and started shooting at the officers,” a police report reads.

“The officers returned fire, killing him instantly.” Four others dashed for the bush but two were arrested.

Yesterday, the manager of Delta Hotel in Nairobi told the Nation Adan had stayed at the hotel since February 9 and left in the early morning of Thursday, February 15. He was arrested hours later in the unforgiving, sun-baked plains of Merti.

“When he came in he filled a computer-generated form and we attached it to a photocopy of his national identity card,” said the manager, who requested anonymity.

“His room had been occupied since then, but on Thursday at about 11.30pm police officers from the Anti-Terrorism Police Unit (ATPU) came to the hotel and told me that one of our clients had been arrested.”

Police found Adan’s clothes, an air ticket from Elwak to Wilson Airport used on February 9, one Safaricom sim card, and two unused Airtel sim cards in the room. Adan had also left a note to the hotel management:

“Please reserve the room for me,” he urged. “I will pay when I return tomorrow.”

Police searched all the occupied rooms in the hotel to confirm the identities of all visitors.

They also arrested two other people in the Central Business District, believed to have been part of a larger terrorism cell that was planning to carry out a massive attack in Nairobi.

The city’s divisional police commanders were also immediately ordered to investigate the occupants of hotels within areas under their guard.

On Sunday morning, two days after Adan and Nane were arrested in Merti, police nabbed two more suspects and found on them receipts of two motorcycles.

The motorcycles — registration numbers KMEE 180R and KMEE 372R — had been purchased by a Mr Abdimajit Adan, and were recovered from two other suspects in Garbatula later.

A confidential report seen by the Nation indicates that the two suspects had been spotted by the public in a bush at Manyangab in Modagashe, about two kilometres west of a local police station.

They were identified as Ahmed Issack Ibrahim, 46, and Said Mohammed Salat, 19. Ibrahim claimed Kenyan citizenship while Salat is from Somalia.

It is not yet clear where the suspects were planning to attack, but police officers attached to the ATPU said the improvised explosive devices and grenades recovered from them would have been powerful enough to bring down more than one multi-storeyed building.

Normally, terrorists using such bomb contraptions connect the IEDs to the motherboards of phones they have linked using such applications as WhatsApp. After they place them in their target locations, they trigger them, causing a lot of destruction.

Preliminary investigations show the car bomb was assembled by Al-Shabaab experts at El-Adde in Somalia.

Shabaab terrorist rented room next to city police base Reviewed by samrack on February 20, 2018 .

Some of the weapons recovered by police in Isiolo who foiled a major terrorist attack. Security officers in Nairobi were Monday evening piecing together details of a plot to bomb the city, and cordoned off a room in a prime city hotel. PHOTO | FRED MUKINDA | NATION MEDIA GROUP Shabaab terrorist rented room next