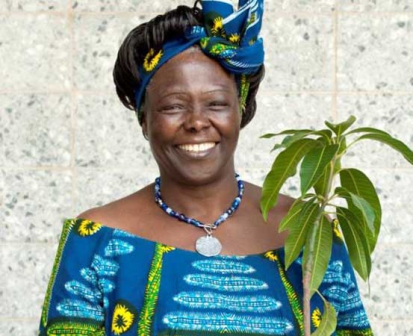 The 2004 Nobel Peace Laureate Wangari Maathai wanted her wealth to be managed by her three children. In her will, seen exclusively by The Standard, Wangari asked Waweru Maathai, Muta Maathai and Wanjira Maathai to manage her vast estate. She also asked them to provide monies for her funeral and settle any debts that she would have at the time of her demise. A towering figure in Kenya and the world, Prof Maathai died on September 25, 2011. At the time of her death, according to documents filed before the court, the environmentalist was a multi-millionaire. In fact, she might have been among the richest women in Kenya. Court documents show that she had assets worth $102,402.55 (Sh150 million). On May, 18, 2006, Maathai made a detailed will on how her estate should be managed. The will gave the children equal share of her wealth. She pointed out that if any of them died, his or her share would be shelved until his/her children were of legal age. Grandchildren Maathai also warned that her grandchildren should not take up their parents’ shares if they (parents) are alive and capable of managing them. The environmentalist also wished that the trustees would educate her grandchildren using money from her estate and at the same time whatever profits would be generated would be ploughed back to increase her assets and wealth. She wrote: “My trustees may raise any part or parts out of then presumptive or contingent expectant or vested share of any grandchild of mine under the trusts herein before declared and may pay or apply the same as my trustees shall think fit for the maintenance, education advancement or benefit of such grandchild.” She wanted her monies used to buy shares and properties after her death. “My trustees shall have the same full power of investment and transporting the investment of such monies from time to time in all respects as if they were absolutely entitled thereto,” she said, adding that no income would be apportioned or used as capital. Also, Maathai wanted her children to consider whether to appoint a firm to manage her estate. She said in the event the children agreed, a firm should manage her estate and this should be put in writing by both parties. The will added that any professional who would be engaged over her estate should be paid. The media is among the items Wangari had invested in during her lifetime. Court records indicate that she bought shares worth Sh10 million in American-based lender, Merrill Lynch. She also had close to Sh1.2 million worth of shares in Nation Media Group. She also had shares in East African Cables and Standard Chartered Bank. Wangari had 19 pieces of land she had bought in various parts of the country. Among them is a piece of land in Lavington and another one on Lenana Road. Land alone would, according to her children’s estimation, fetch Sh81.5 million – the highest valued going for up to Sh30 million. The deceased also had a safe deposit box that held Sh500,000, three vehicles; a Mercedes Benz, Volkswagen and a Toyota RAV 4, valued at Sh1.3 million. In terms of actual cash, Wangari had Sh68 million held in six banks accounts. One account at Barclays held Sh65 million. By the time she died, she had Sh17 million liabilities, accruing from the purchase of two acres of land from Acorn Properties Ltd.
Source:https://www.standardmedia.co.