Poll battle to determine who will be Kiambu’s governor 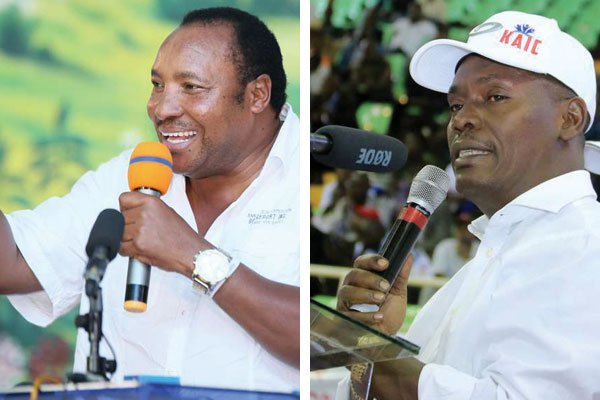 Kabete MP Ferdinand Waititu (left) addresses a congregation in Thika, Kiambu, on May 8, 2047. The other side of the photo shows Kiambu Governor William Kabogo speaking to independent candidates on May 20, 2017 at Safaricom Indoor Arena in Nairobi. PHOTOS | NATION MEDIA GROUP

Poll battle to determine who will be Kiambu’s governor

Mourners at the funeral of James Nderu in Gatong’ora in Ruiru were surprised when Kiambu Governor William Kabogo arrived at the home unannounced and in a three-car motorcade.

In the motorcade was a Range Rover Sports, a double-cabin pick-up and a Land Rover Defender.

It was May 30, about two weeks after Mr Kabogo shed the red, black and gold livery of the Jubilee Party and switched to green and yellow, leading the ranks of those who lost in the party’s nominations and decided to run as independent candidates.

MEETING WANANCHI
While expectations had been that Mr Kabogo would pump up his Hummer’s tyres, strip it of Jubilee’s colours and fly to all corners of the county with his helicopter, he has sought to portray a different side.

After the funeral, Mr Kabogo headed to Ruiru town, where he was photographed waiting for his turn at a barbershop in an iron sheet building and after being shaved, having his head washed by a girl who couldn’t mask her excitement.

Mr Kabogo then walked through a filthy lane while interacting with wananchi without the usual contingent of aides that always surrounded him before having his dark brown shoes polished while seated on a wooden stool.

A NEW MAN
Looking through his Facebook, Twitter and Instagram pages and you will see the governor playing pool at a dimly lit bar, alighting from a matatu, shaking hands with a woman at a market, taking selfies with youngsters, eating chapati at a shack with a polythene bag as his glove and many other similar images.

This is a far cry from the Kabogo of earlier times, with a Hummer and a huge truck whose make many struggled to tell.

He also does not hand out the Sh300 per person referred to as muchere (rice) and which had some referring to him as mukawa (hotel).

Instead, he is out to win the hearts and minds of the voters.

PROUD AND ARROGANT
After losing the nomination for the Jubilee Party ticket to Kabete MP Ferdinand Waititu, the governor bounced back with the new brand, with an image consultant handling his transformation from a proud braggart to a humble man.

The governor would later say that he was the victim of propaganda, a reference to messages and social media posts circulated in the days to the nominations transcribing remarks attributed to him.

With his history in politics as a background, he had found it hard to shake off the allegations that he was rude, proud and arrogant.

RUTO PRESIDENCY
Mr Kabogo has also attributed his loss to what he refers to as machinations of Deputy President William Ruto, who is planning to inherit the seat from President Uhuru Kenyatta if he is re-elected.

“I am not being fought because of you (Kiambu people), but by those who want seats in 2022.

“But I will face them head on and I am not keeping quiet this time round.

“I made a similar stand before, when I said this person (Ruto), we will not give him the seat just like that, and I am saying it again, that we will not support him unless we see development,” Mr Kabogo was recorded having said during an event last week.

ACCEPT DEFEAT
The Deputy President has however discounted this narrative.

Jubilee Party’s National Elections Board Chairperson Andrew Musangi has also rubbished Mr Kabogo’s claims, which he said were baseless, saying his behaviour was a result of his refusal to accept defeat.

“No one was rigged. Every candidate had agents in the polling centres. How then was the process rigged under his (Kabogo agents’) noses?”Mr Musangi asked.

Mr Kabogo’s main competitor remains to be Mr Waititu, whose modus operandi before the nominations was what the governor is doing now.

DEMERITS
He used to attend funerals, hold village meetings with elders and was often seen walking in the county’s big towns, mobbed by the youth.

The governor also has to contend with the fact that Mr Waititu has in his corner the President, whose first tour after the nominations was to Kiambu, along Thika Road.

Having the region’s de-facto political head backing Mr Waititu, and telling voters to go with ‘a six-piece suit’, could also work against the governor.

Going independent also means that the individual does not carry along the large numbers of fellow politicians to help excite the masses.

The governor has also criticised the President.

“This is the last one for the Kenyatta’s and last one for Raila, and from there we move on,” the governor said.

Other candidates in the race are Mr Gakuru Kanyanja of Maendeleo Chap Chap and Mr James Ng’ang’a, an independent candidate.

MEND KIAMBU
Mr Waititu and his running mate James Nyoro are enjoying the support of all other candidates in the region and have vowed to “undo all the messes created by Mr Kabogo’s leadership”, saying they have a manifesto that will do what the governor failed to do as far as development is concerned.

Their first task, they said, would be to review all the county laws, which they say are draconian and bad for business, adding that their government would be all-inclusive.

The two have also been critical of Mr Kabogo’s rule and accuse him of lacking respect for the people of Kiambu even after rejecting him during the primary.

“In 2013, I was in the race and after unsuccessful bid (for TNA ticket), I decamped to another party and you all saw what happened.

“Though the Kiambu people loved me, they refused to vote for me because I was in the wrong party,” Mr Nyoro said.

INTENSIVE CAMPAIGNS
The politician who in 2013 lost to Mr Kabogo in a bruising and ugly competition said the governor should acknowledge that all candidates equally have God’s favour, and therefore he should accept the outcome of the primary because it was not a must for him to win.

Mr Waititu and his running mate have been holding daily meet-the-people tours, engaging various stakeholders to lay out their agenda as they seek to solidify their support.

The streetwise politician’s new strategy has already earned him endorsements from traders, teachers, coffee and dairy farmers among others in the region.

HEALTH CARE
These circumstances make for an interesting second duel between Mr Waititu and Mr Kabogo – some call it the Panjab derby after the university in India, which both attended at different times in the 1980s.

Mr Kabogo figures that with more than 800,000 voters in the crammed county not having participated in the primaries, he has a good chance to turn the tide in his favour.

He has also focused on his record, especially in health care provision, which has improved since he took over.

REVENUE
The county government is also constructing hospitals in Thika, Kirenga in Lari, Tigoni in Limuru, Thogoto in Kikuyu and Kabete in Wangige.

His argument that Kiambu is now one of the top revenue collectors amongst counties, growing from Sh1.25 billion collected in 2013/14 to Sh2.49 billion in 2015/16 has been countered by the argument that it made business more expensive for traders in markets and increased the cost of construction.

Mr Waititu has promised Mr Kabogo a more embarrassing defeat than what he experienced during the party primaries.

Poll battle to determine who will be Kiambu’s governor Reviewed by samrack on July 1, 2017 .

Kabete MP Ferdinand Waititu (left) addresses a congregation in Thika, Kiambu, on May 8, 2047. The other side of the photo shows Kiambu Governor William Kabogo speaking to independent candidates on May 20, 2017 at Safaricom Indoor Arena in Nairobi. PHOTOS | NATION MEDIA GROUP  Poll battle to determine who will be Kiambu’s governor Mourners