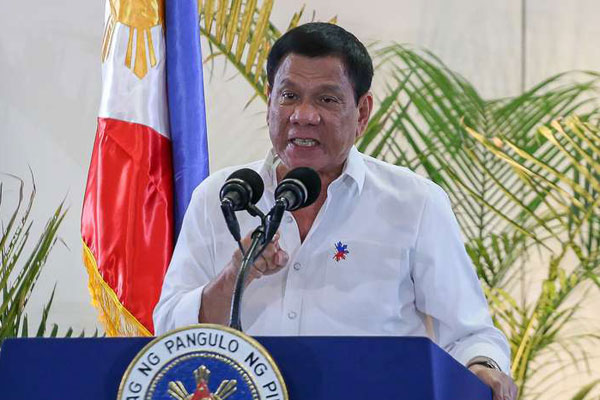 Manila on Tuesday “strongly protested” about an American television drama which shows a fictional Philippine president making a sexual advance on the US secretary of state.

In the trailer for the latest edition of “Madam Secretary”, the lead character punches “the Philippines’ unconventional new president” in the face and gives him a bloody nose in reaction to his unwanted pass.

“I clobbered a world leader instead of saving a major regional agreement,” the secretary of state says.

The Philippine embassy in Washington said in a statement it had written to the producers of the show, the CBS network, to urgently request it “take the necessary corrective actions”.

“This highly negative portrayal of our Head of State not only casts doubt on the respectability of the Office of the Philippine President but also denigrates (the) way our nation navigates foreign affairs,” the statement said.

While the description for the trailer used a fictional name for the Philippine president, the embassy said the show mirrored current events.

On Tuesday he added to that list when he addressed a female guest while giving a nationally televised speech at the presidential palace.

“I am distracted. You close your legs, God damn,” said Duterte, 71, drawing laughter from the crowd.

“Is this on national TV? Your dad’s listening.”

The president had previously been criticised for wolf-whistling at a woman journalist at a press conference and joking about looking at his female vice president’s legs.

During last year’s presidential campaign, the Australian and American ambassadors in Manila criticised Duterte for saying he had wanted to rape a “beautiful” Australian missionary who was murdered in a prison riot.

Duterte reacted angrily to that criticism, saying the remarks had been misinterpreted.

Duterte also boasted on the campaign trail about having two mistresses but said the women would not cost taxpayers much because he kept them at cheap boarding houses and took them to by-the-hour hotels for sex.

However Duterte has won praise for a range of policies promoting women’s rights, including reproductive health.

His spokesman Ernesto Abella also criticised the show on Tuesday while making an apparent reference to womanising American leaders.

“I think they are projecting something they would really like to say about their own situation. I think they should use a fictional US president,” Abella told reporters.

On social media, some Filipinos pointed out that thousands of people had been killed under Duterte’s controversial drugs war and questioned why Philippine authorities should be outraged at a fictional television show.

“So it’s not OK for a TV show to punch the fictional President of the Philippines but it’s OK for 7,000+ people to be shot without trial? The hypocrisy is particularly juicy,” one Facebook user posted.

Philippine authorities have a history of protesting against negative portrayals in Hollywood of Filipinos.

In 2009 the government demanded an apology from actor Alec Baldwin for joking about wanting to get a Filipina mail-order bride.

The producers of the top-rated “Desperate Housewives” show also apologised in 2007 after a lead character put down Filipino doctors.

Philippines slams US drama over president’s sexual advance Reviewed by samrack on March 11, 2017 .