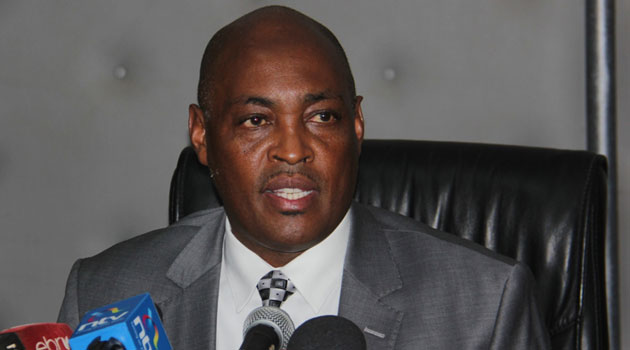 President Uhuru Kenyatta has made drastic changes within the National Police Service that have affected the entire top brass, leaving only Inspector General Joseph Boinnet.

Deputy Inspector General in charge of Administration Police Samuel Arachi and his counterpart in charge of the Kenya Police have been replaced, and their names forwarded to the Public Service Commission for redeployment.

Directorate of Criminal Investigations boss Ndegwa Muhoro has not been spared either.

In an acting capacity ahead of vetting and approval, the new Deputy Inspector General of Police in charge of Kenya Police is Edward Njoroge Mbugua, Noor Gabow will now head the Administration of Police while George Kinoti Maingi assumes office as head of the Directorate of Criminal Investigations.

Kinoti is the current National Police Service spokesperson, while Mbugua is a former presidential escort commander.

The new changes come a time when the National Police Service was under unrelenting attacks from rights groups and the Opposition, for how they managed the country’s pro-longed electioneering period.

During and after August and October’s elections, tens of people were felled by police bullets leading to a public outcry.

The majority were opposition supporters, who would often clash with police during protests.

Muhoro is a career police officer having served in various ranks and stations since his enlistment in 1991.

He served as Commandant of the Kenya Police Staff College (2008-2010) based in Loresho.

His entry at the DCI was on 2010 upon appointment by President Mwai Kibaki, replacing Simon Gatiba Karanja who died in his home in Juja.

His colleagues have termed him as an intelligent and competent officer who worked diligently for his country.

“He was a good but a firm boss,” a senior officer at the DCI told Capital FM News, shortly after the Kenyatta’s announcement.

He joined the police force in 1991 and is a holder of Masters degree in International Studies from Moi University.

During his long stay at the DCI, Muhoro has had his low moments with integrity questions being raised, after he was accused of interfering with investigations on three separate matters.

But he then said it was part of a campaign to tarnish his name.

Before his appointment as the National Police Service spokesperson in 2014, Kinoti was at the Central Bank, as an assistant director in charge of security.

He has been calm during his tenure, but firm while protecting the image of the National Police Service.

His tenure was marked by highly volatile political activities.

He is an Assistant Inspector General of Police (AIG).

The outgoing Kenya Police boss was appointed to the position in 2015, a period when the country was facing a serious terror threat from the Somalia based Al-Shabaab militia.

Kitili was the GSU commandant until his nomination replacing Grace Kaindi.

He also served as the Rift Valley regional coordinator.

In June 2012, he was chased out of State House, where he was the commandant of the presidential escort over an alleged disagreement with a member of the then First Family.

He was then appointed head of the national armoury.

He is a career civil servant who started off as an Assistant Secretary in 1989 and rose through the ranks to the position of District Commissioner in 1983 and was later promoted to the position of Senior AP Commandant 1 in 2012 prior to his current appointment as a DIG (AP).