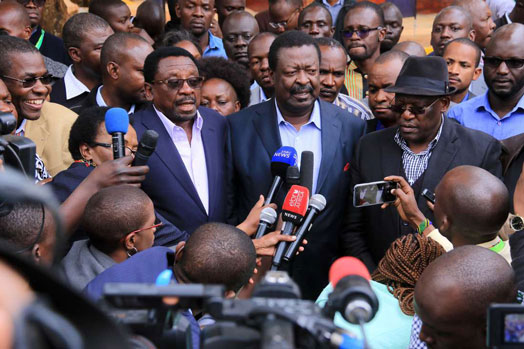 By EVELYNE MUSAMBI
Leaders of the opposition coalition Nasa have said they won’t challenge results of the presidential election in court.

Nasa chief agents Musalia Mudavadi and James Orengo made the declaration on Friday evening after storming out of a meeting for presidential agents organised by the IEBC.

Mudavadi further said that the coalition will not be part of the announcement that will be made by the commission.

He stated that the issues raised by the coalition were not adequately addressed and that the commission said it would respond to the issues after making the announcement.

The IEBC Chairman Wafula Chebukati was set to make an announcement at 7:30pm the same time the opposition leaders made their press conference.

“We have raised our objections because earlier on when we were here we had seen that there was every activity indicating that they wanted to announce in the afternoon. We raised some very serious concerns and they have not responded to them and the chairman has told us that whatever we raised they shall respond to us after the event,” said Mudavadi.

He added that the commission has made up its mind to make a declaration and that Nasa shall not be party to it.

Asked if the commission had informed them if the process had been concluded, Mudavadi said, “They say they have not finished and whatever is left to them is now not significant to the outcome that means they have concluded what they want.”