Four things to know about the Kenyan election 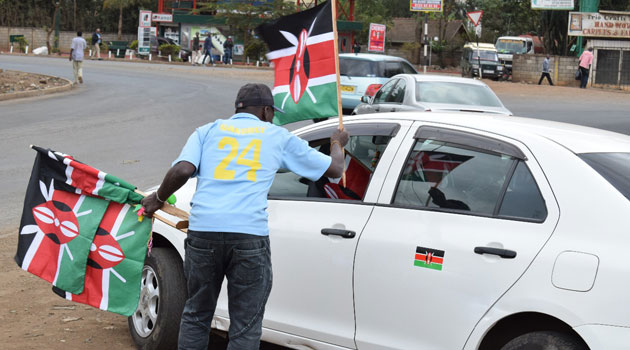 Four things to know about the Kenyan election

Though it is seen as the most democratic country in east Africa, Kenya is on a knife-edge because its opposition coalition is claiming election results are being rigged.

Partial results from Tuesday’s general election released by the electoral commission (IEBC) show President Uhuru Kenyatta with a solid lead over his main opponent Raila Odinga, but Odinga claims those numbers are fake.

The stakes are high for Kenya: the country is an African powerhouse in the making but it is struggling to keep its deeply polarised political landscape from rupturing.

– Why are Kenyans nervous? –

Because they have been here before.

Odinga has previously stood for president three times. He placed third in 1997, and in both 2007 and 2013 he cried foul.

The 2007 vote is notorious because international observers agree it was probably rigged. Shortly after the disputed polls, violence broke out nationwide, leaving 1,100 people dead and 600,000 displaced.

Ethnic identity is strong in Kenya and the country’s different peoples turned on each other as the fighting stretched into 2008.

Elections in 2013 ended largely peacefully as Odinga took his grievances to court.

However, the divisions from those clashes remain in Kenyan society today, and many Kenyans fear they could erupt again if Odinga’s fraud claims are not resolved.

– What are the opposition’s complaints? –
Odinga believes that partial election results the IEBC is posting on a public website are fabricated.

Odinga has provided documents allegedly showing a database being manipulated, as well as documents purported to be from the IEBC server showing him to be the true winner.

The opposition also says 11,000 tallying forms that could verify the electronic results have not been provided.

They are now demanding access to the IEBC servers if they are to accept the election result.

The IEBC, for its part, has denied NASA’s claims.

– How are votes counted? –
It’s complicated, and the country is abuzz with talk about “Form 34A” and “Form 34B” — seen as crucial to verify the electronic results Odinga is disputing.

Votes were counted in each of the 40,883 polling stations and the results entered onto a Form 34A, signed by agents from all parties and election officials.

These results were then typed into a tablet and sent to the IEBC in Nairobi before going on to a public website.

The Form 34A is meant to be authenticated via a photograph, but it has taken time to upload these, further stoking tensions.

All these forms are then sent to regional collation centres, where they are added together with other results on a Form 34B.

That is then sent on to Nairobi. It is only after all Form 34Bs are tallied and validated that presidential results are announced.

– How are Kenyans reacting? –
Most people aren’t reacting at all. If anything, the country is abnormally quiet. Nairobi and other Kenyan cities are usually bustling and packed with traffic.

All that has died down since Tuesday, the day of the vote, which was a public holiday.

Protests have been isolated in Odinga strongholds in Nairobi slums, and the western city of Kisumu.

Two protesters were shot dead in the Mathare slum by police who claimed they attacked them with machetes.

Another two people were gunned down by police when they allegedly attacked a polling station. A polling worker who was stabbed in that attack also died, along with a bystander caught in the crossfire.

Four things to know about the Kenyan election Reviewed by samrack on August 11, 2017 .

Four things to know about the Kenyan election Though it is seen as the most democratic country in east Africa, Kenya is on a knife-edge because its opposition coalition is claiming election results are being rigged. Partial results from Tuesday’s general election released by the electoral commission (IEBC) show President Uhuru Kenyatta with a solid