Murder in the family: Alarm as wave of domestic violence hits Kenyan homes 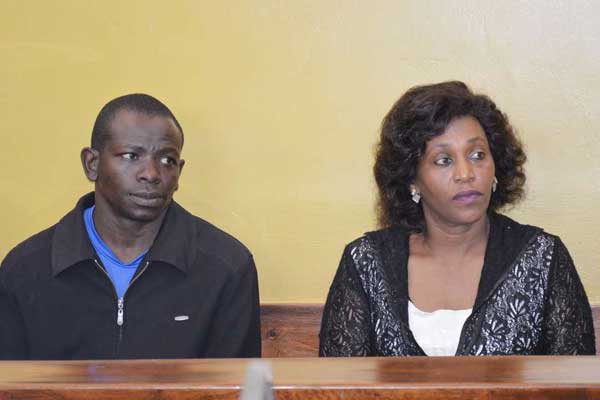 Jane Muthoni, former Icaciri Secondary School principal, and her co-accused Isaac Ng’ang’a at the Kiambu High Court on September 6, 2017 during the hearing of a case in which they have been charged with killing her husband, Solomon Mwangi, the principal of Kiru Boys High School. PHOTO | ERIC WAINAINA | NATION MEDIA GROUP

Murder in the family: Alarm as wave of domestic violence hits Kenyan homes

The marriage vow that commits spouses to love one another for better or for worse, till death parts them, has remained unedited, and therefore undisturbed, for decades.

But a new trend is rocking the love boat — in a very tragic manner.

It involves spouses killing their partners, or paying criminals large sums of money to kill them, and for all manner of reasons.

Recent such cases have been attributed to, among others, fights over property, drug abuse, and infidelity.

These, as criminal division judge Roselyn Korir points out, are not just random acts of crime, but proof that “domestic violence continues to be a problem in Kenya today, as evidenced by increasing number of reported cases and murder cases ending in our courts”.

The violence, however, is getting more vicious, as the case against Boniface Litunya Owendo, which elicited Justice Korir’s reaction, illustrates.

Litunya was recently found guilty of dousing his wife, Mueni Syombua Munuve, with paraffin, on November 19, 2010, at their house in Njiru estate in Nairobi before setting her ablaze.

She died shortly afterwards, and Litunya will spend the rest of his life in prison for that. His wife had accused him of having an extra-marital affair.

While judging Litunya on January 30 this year, Justice Korir suggested that “it’s time relevant institutions of government, non-state actors, community and religious organisations, among others, took up the challenge and urgently devised interventions aimed at stemming the unlawful loss of life in families through domestic violence”.

Criminal lawyer John Swaka says the most common ways of eliminating spouses have been in the heat of the moment, where a knife or a blunt object that is readily available in the house is used to either kill instantly or cause serious harm leading to death after a short while.

Armed spouses in this category often use their guns to kill their partners.

The other common way has been calculated elimination, where spouses hire hit squads so that they do not incriminate themselves, and for the murder to appear like an accident or a non-targeted crime.

“The problem is that there is nothing like a perfect murder,” says Mr Swaka. “There will always be some traces and evidence pointing towards the guilty spouse. If there were a perfect murder, we would not be having murder cases involving spouses being brought to court as we have today.”

That is what happened in the case against Sheila Wanjiku Kibinge, a Kenyan businesswoman based in the US who was last July sentenced to death after High Court Judge Jessie Lessit found her guilty of planning the killing of her husband.
KILLED

Leonard Kibinge Kiruri was killed on the night of April 14, 2014, at Gitaru village in Kikuyu Sub-county within Kiambu, and Justice Lessit observed that Wanjiku was with her husband in their car.

However, she claimed that she was awoken by a gunshot. She turned to see her husband’s head leaning on the steering wheel, she said, after which she fled.

“I find that the accused’s decision to walk away from the scene without finding out what had happened to her husband, or whether he was okay, to be a very unnatural reaction,” said Justice Lessit, in the July 20, 2017 judgment,.

Wanjiku had initially told the police that she and her husband were carjacked as they headed home, and that it was the kidnappers who killed her husband. The judge dismissed the claim.

The prosecution had told the court that the motive of the offence could have been a tussle over land situated in Mtwapa, which had been sold by the husband.

Lawyer Catherine Mwaniki of the Office of the Director of Public Prosecutions, argued that even where postmortem exams fail to link a person to the murder of their spouse, investigators will still look into whether there was negligence on the part of the accused.

“Investigations will still seek to establish whether by failing to act in a particular way, say rush the seriously injured spouse to hospital, such a conduct led to the death of spouse,” said Ms Mwaniki.

This mainly applies where the two were alone, say in the house, and the partner was the only person in a position to help. Such a duty to act may, however, not apply in case of a road accident.

Further, in obvious cases, such as where it is evident that a spouse has chopped off the head of the other using a panga, then even when the postmortem exam fails to establish cause of death, the prosecution will still prefer murder charges against the accused.

Ms Mwaniki elaborated on these scenarios on Monday before Justice Luka Kimaru while explaining the various leads the police are looking into before deciding on what charges to prefer against Dr Fredrick Ogola, a Strathmore University lecturer who was arrested on January 1 in connection with the death of his wife, Margaret Gobi Mwachongo, at their Lavington home, Nairobi, on December 31.

Murder in the family: Alarm as wave of domestic violence hits Kenyan homes Reviewed by samrack on January 16, 2018 .

Jane Muthoni, former Icaciri Secondary School principal, and her co-accused Isaac Ng’ang’a at the Kiambu High Court on September 6, 2017 during the hearing of a case in which they have been charged with killing her husband, Solomon Mwangi, the principal of Kiru Boys High School. PHOTO | ERIC WAINAINA | NATION MEDIA GROUP Murder