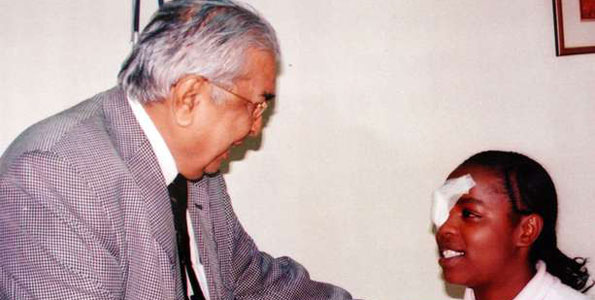 Dr Kanaksinh Karsandas Babla greets a patient at the Lions SightFirst Eye Hospital in Nairobi’s Loresho after a cornea transplant in 2011. PHOTO | FILE

A Mombasa-based billionaire family, the Bablas, has raised its shareholding in KCB Group to 3.14 per cent, a stake that is valued at Sh3.8 billion as per the current share price of the bank.

The Babla family, through direct investments by five related individuals including Dr Kanaksinh Karsandas Babla, has built up the position from a stake of less than one per cent in the bank in 2011.

Latest regulatory filings show that the Bablas had accumulated 95 million KCB shares as of October, representing a 3.14 per cent stake that places them top of the list of local individual shareholders of the country’s largest bank.

Little is known of the Bablas except Dr Karsandas (popularly known as Kanubhai Babla) who was profiled by a publication of the Mumbai-registered trust Global Bhatia Foundation.

Dr Karsandas’ parents lived in Tanzania before relocating to Kenya in 1936, settling in Mombasa. The investor, who was born in 1931, later ventured into investments at the Nairobi Securities Exchange (NSE).

“I owe a lot to this country (Kenya). This country has given me everything I want, and now it is my time to give back to the country in my sunset years,” Dr Karsandas was quoted in the publication.

The investor has given hundreds of millions of shillings to charity including to Lions Club where he has donated over $700,000 (Sh71.4 million), emerging as one of the top global benefactors of the organisation that helps the disabled and provides disaster relief.

He has also funded the Babla Diani Secondary Secondary School in Diani, Mombasa to the tune of $1 million (Sh102 million).

Dr Babla has also funded open heart surgery for babies and efforts to combat breast cancer including through awareness. The investor is most proud of the Kanubhai Babla Eye Bank in Nairobi, which is billed as the only one of its kind in East and Central Africa.

The eye bank, which was inaugurated by retired President Mwai Kibaki in 2009, is meant to boost availability of corneas that are used in repairing eyesight.

READ: The rise and rise of Kenya’s silent billionaires at NSE

Other institutions that have benefited from his generosity are Mvita Health Centre, Bomu Medical Centre; and Hare Krishna Temple in Nyali, Mombasa.

The Bablas’ big investment in KCB is seen as a signal of confidence in the NSE-listed lender.

The family’s rise has relegated former KCB director Sunil Shah to second place in the list of top local individual investors. Mr Shah, who has sold or transferred KCB shares worth over Sh1 billion since 2011, now has a residual 1.5 per cent stake in the lender that is valued at Sh1.8 billion.