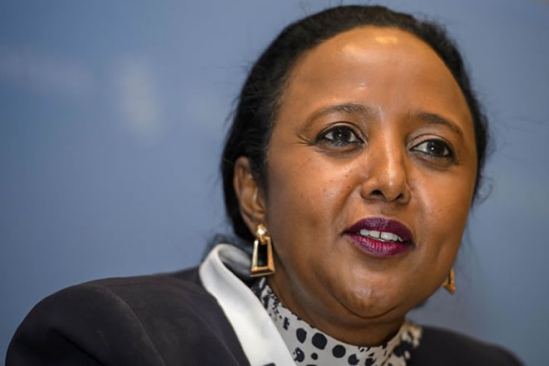 Los Angeles, USA: The Government is in the process of opening five Consulates across United States to serve the Kenya Diaspora better and facilitate voting by Diaspora in the 2017 General Elections.

In a statement to Kenya Diaspora meeting in down town Los Angeles, Foreign Affairs and International Trade Cabinet Secretary Amb. Amina Mohamed said Honorary Consuls for Dallas, Boston Minneapolis and Chicago will soon be appointed while the choice of Seattle for a consulate awaits formal approval.    The CS at the same time conveyed President Uhuru Kenyatta’s apologies for not being able to attend the meeting as earlier planned and promised a visit by the Head of State could happen before the end of the year. “The President asked me to pass his best regards and to assure you of his solidarity with all Kenyans living, working and studying in California and other States of America,” said Amina. The government attaches great importance to the Kenya diaspora primarily as part of the wider Kenyan family and also because of its immense contribution to development. Last year, Kenyans living abroad remitted 1.5 billion US Dollars into the country. Being the largest diaspora community, the Kenya US Diaspora contributed about 50 per cent of this amount. These huge remittances, coupled with the invaluable skills and contacts that Kenyans living abroad possess, makes Diaspora a critical asset for national development. See also: Kenya wants donors to pay for Somali refugee eviction plan “We are developing an incentive framework on remittances which includes lowering the costs of diaspora transactions as well as aggregate diaspora remittances. We are also exploring possibilities of preferential duty waivers and other concessions for diaspora businesses,” said Amina.

She urged the Kenya Diaspora to take advantage of the many investment opportunities citing emerging sectors such as real estate and ICT. Agriculture also offers lucrative opportunities especially in value addition. Other opportunities are available in major infrastructure projects being undertaken by the government. Speaking during the meeting, Kenya Ambassador to the United States, Njeru Githae said, on the order of the President, the mission had established a diaspora desk manned round the clock. He said the Mission will be lobbying for international jobs for Kenyans and urged the Diaspora to bring to his attention any job vacancies that they may require to be lobbied for. “Let us know your requirements and we will assist you”, said Githae. Paddy Mwaura a representative of the Diaspora asked the government to assist returning professionals, especially engineers and lawyers who find it hard to fit in Kenya because of “unfair requirements by professional bodies.”
Read more at: https://www.standardmedia.co.ke/article/2000159817/kenya-to-open-five-consulates-in-us-ahead-of-2017-elections

Kenya to open five consulates in US ahead of 2017 General Elections Reviewed by samrack on April 27, 2015 .

Foreign Affairs Cabinet Secretary Amina Mohamed Kenya to open five consulates in US ahead of 2017 General Elections  Los Angeles, USA: The Government is in the process of opening five Consulates across United States to serve the Kenya Diaspora better and facilitate voting by Diaspora in the 2017 General Elections. In a statement to Kenya