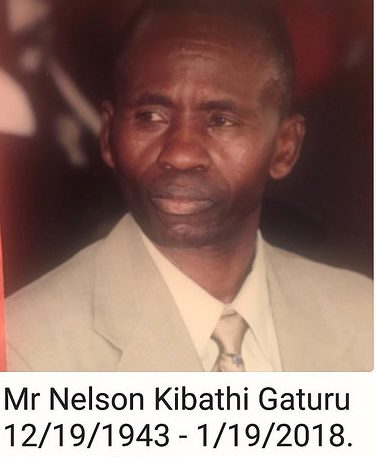 We humbly announce the passing of our dad, Nelson Gaturu Kibathi on January 19th, 2018 at Mater hospital Nairobi after a long illness. He was married to the late Mary Wanjiku Kibathi in 1964 at St Andrews Church in Nairobi and were Members of St Francis Church Karen.

He is survived by his sons Chris “Banz” Kibathi, Richard Kamau  and his wife Melanie, Grandchildren, Daphne and Chris Kamau of Oxford MA, Vanessa and Brandon Kibathi of Worcester MA.

He emigrated from Kenya in 1985 to pursue his Masters in Human services Management, enrolled at NorthWestern University in Illinois Chicago and finally graduated at Worcester State College.  He had previously worked for National Christian Council of Kenya (NCCK) as a social worker, & recently at DCF/ Department of children and family until he retired 2010 as a field manager.

He was diagnosed with Esophageal Cancer in 2004, fought a great fight and survived Cancer.  Mzee  Kibathi was instrumental in bringing his immediate and extended family to these United States. He was a staunch Educator who believed in the value of academics and a true disciplinarian at heart. He had a passion of visiting with his family, specifically his grandchildren that he worshipped with his heart and soul.  Mzee Kibathi’s passion was auto mechanics, he loved fixing cars and anything that was broken. A true fixer upper.

He retired back to Kenya in 2016 and lived his last days at his humble aboard in Hardy Estate Karen. He was a Christian, Loved the Lord and tithed at several churches in the Worcester Area, lastly at Liberty Church in Shrewsbury and St. John’s in Sutton.

Despite having overcome Cancer, Dad was plagued with health issues over the last decade. He fought a good fight he shall be sorely missed.

We are holding prayers every evening at his son’s Kibathi’s house at 8 Minerva street Worcester from 6pm.

He was in ICU for the last week and a half and as you can imagine he racked up some medical bills that we need to settle. Your contributions will be highly appreciated.

We hope to see you there, he was one of the original Worcester diaspora members, a visionary and dedicated member of our community.

It is well in our Soul – may he Rest In Peace