Trump to meet May, Netanyahu, Kagame in Davos: White House 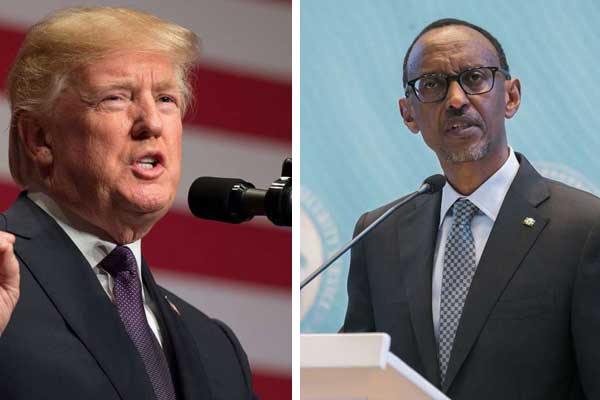 Trump to meet May, Netanyahu, Kagame in Davos: White House

US President Donald Trump is set to meet with the British and Israeli prime ministers, Theresa May and Benjamin Netanyahu, as well as Rwandan President Paul Kagame in Davos later this week, the White House said Tuesday.

On Friday, the day Trump is to address the World Economic Forum, he will also meet Mr Kagame for talks on trade and reaffirming the US-Africa relationship, McMaster said.

President Trump is aiming to be the “best salesperson” for American economic interests when he goes to Davos later this week, the White House said.
“We’re going to the World Economic Forum to share President Trump’s economic story and to tell the world that America is open for business,” said Trump’s chief economic adviser Gary Cohn.

“We want the world to invest in America and to create jobs for hard working Americans,” he continued, adding that Trump’s economic agenda — focused on aggressive deregulation and corporate tax cuts — had “unleashed the US economy.”

The former real estate tycoon is “firmly committed to being the best salesperson the US has to drive economic growth and drive prosperity and drive a better quality of life for American citizens,” Cohn said.

The Trump administration has repeatedly lashed out at allegedly unfair trade agreements and practices, slapping additional import duties on products from across the world, claiming they benefited from unfair state subsidies.

Soon after he took office, Trump announced the US was pulling out of the Trans-Pacific Partnership (TPP) signed in 2015 by a dozen nations that accounted for 40 percent of the global economy.

The remaining 11 countries announced Tuesday they would move forward with the deal without Washington.

He has also repeatedly threatened to pull out of the North American Free Trade Agreement (NAFTA), which is currently being renegotiated between its three participants — Canada, Mexico and the US.

Cohn suggested, however, that the US was working on new bilateral agreements, without providing further details.

“The US is pulling back from nothing,” he said.

Trump to meet May, Netanyahu, Kagame in Davos: White House Reviewed by samrack on January 24, 2018 .

Trump to meet May, Netanyahu, Kagame in Davos: White House WASHINGTON US President Donald Trump is set to meet with the British and Israeli prime ministers, Theresa May and Benjamin Netanyahu, as well as Rwandan President Paul Kagame in Davos later this week, the White House said Tuesday. Trump will meet May Thursday to address