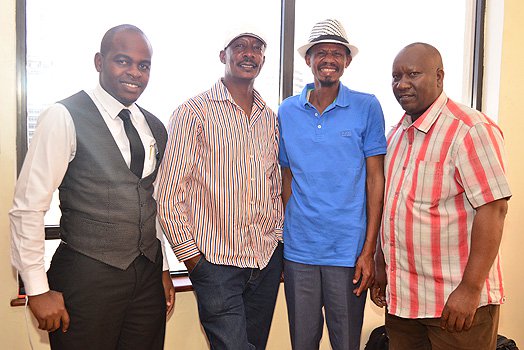 By BONIFACE NYAGA
Internet sensation Martin Kamotho Njenga, popularly known as Githeri Man, has acquired celebrity status and now the prosperity that comes with it.His two-week transformation from a githeri-eating voter struggling to make ends meet to a national brand with international acclaim is complete.

Already, he has been given a plot in Karen, a five-year supply of designer clothes, mobile phones worth more than Sh200, 000 and brand endorsements of unknown value.

Githeri Man can’t even walk in the city centre anymore. In every step he takes, he gets mobbed by fans begging for selfies.

Requests for corporate endorsements and participation in marketing initiatives have been pouring by the day, and he now has a team comprised of a lawyer, a manager and a personal assistant to manage his activities.

His lawyer Danson Ng’ang’a revealed how Githeri Man’s family approached him to protect them from potential fraudsters and invalid contracts.

“When the family contacted me, they said they are getting so many calls from corporates and individuals but we want to legalise all the engagements we have and we want to walk on the legal path, so any promises, any contracts can be valid,” said Mr Ng’ang’a.

His manager, Christopher Kirwa, explained that his role is to link the family with potential sponsors and partners.

“My role here is to advice the family and bridge the gap between the people who want to help them, in terms of corporates, and them… and to guide them in that process so that it’s easy. As a corporate they expect a certain way of dealing which is what we did. So, I’m acting as his agent, that’s my role,” explained Mr Kirwa.

He added: “The first guy we were able to do an activation with was Big Square because they run a chain of restaurants. We then had User Name (Real Estate dealers), Bonfire Adventures and Happy Feet (shoe sellers).”

“We’re thankful to the person who took the picture, the guy who created the memes, the Kenyans who started sharing the memes and creating their own which went viral. #githeriMan was trending for 48 hours in the middle of a hotly fought elections. The tension started lessening because of him and that’s a big thing, it has never happened before.”

Githeri Man’s uncle and personal assistant Nahashon Gitau said the family will keep him grounded throughout his newly found fame.

“As a family we have decided to come together so that we can help Martin reach the highest level he can reach. This is the kind of luck that few people get. As a family, we have walked with this team to ensure Githeri Man does not return to the level that he was in,” said Mr Gitau.