Video:Makau Mutua on the spot over remark on Uhuru’s election 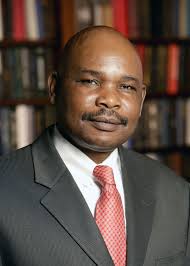 Makau Mutua on the spot over remark on Uhuru’s election

United States-based law lecturer Makau Mutua was on Wednesday forced to eat humble pie over his much-publicised remarks that he would never recognise the election of Uhuru Kenyatta as President of Kenya.

The controversial scholar declared he would have no trouble working with the President were he appointed Chief Justice, saying the remarks were made in his capacity as a private citizen as a social critique.

Mr Mutua said if appointed, he would visit the head of the Executive within a week to lay the ground for ways of collaboration and engagement. He said the times had moved to a different context after the International Criminal Court (ICC) cases against the President and his deputy William Ruto were terminated.

The law professor spoke at the Supreme Court when he appeared before the Judicial Service Commission (JSC) in his bid to succeed his bosom ally Dr Willy Mutunga in an interview that lasted close to six hours.

Attorney-General Githu Muigai was the first to ask questions and the two professors engaged in an ‘intellectual discourse’ after the AG brought up the matter.

Prof Muigai: In the Supreme Court of the Republic after hearing arguments from counsel of both parties pronounced itself and pronounced the election as one that they could not disturb on the basis of the appreciation of the law. You recall that?

Prof Mutua: Only too well.

Prof Muigai: Arising out of that the President and his deputy were sworn into office. You have been quoted in several publications as saying you do not recognise either the finding of the court or the instrument that brought the current administration into office. Do you still persist with that view?

Prof Mutua: Let me preface my remarks by saying that both you and I and every commissioner here exists in several realms…. The same applies to me. There is the citizen Makau Mutua, there is Prof Makau Mutua and there could be the Chief Justice Makau Mutua. Citizens have a right of conscious and what the system of government is based upon is the notion that dissent is a fertiliser for democracy. Dissent is good.

Prof Muigai: If you were to be given the Bible, you would be bound by Article 166 (i). You are telling us you would have little difficulty in accepting the oath of office from the President?

Prof Mutua: What I want to make clear to you is, there is a distinction between citizen Makau, who has a right to dissent, and Chief Justice Makau Mutua sitting as CJ of the Republic of Kenya. For clarity, I have never said in all my pronouncements in this question Mr Kenyatta was never declared President and confirmed as such by our Supreme Court…. I dissented as a private citizen….. Even in families people disagree and dissent.

Prof Muigai: Learned professors can write several articles on one side and another set can write on the other side. But the public will ask what did the court say? You agree with that?

Prof Makau: The public will ask what did the court say, depending upon what the credibility and the confidence that the public has in the court.

The 1958-born Kenyan-American scholar, who in December 2014 stepped down as Dean of the University at Buffalo Law School after serving for seven years though he still remains a SUNY Distinguished Professor and the Floyd H. & Hilda L. Hurst Faculty Scholar at the law school, also said that the burden of proof used by the court in the petition did not take into account what he termed as gross failures of the IEBC, which he said let them off the hook.

He added that some courts would have found the election invalid and ordered a rerun.

Prof Mutua added that he refers to the President as “Mr Kenyatta” because the Head of State has many titles and he can choose any of them and he has “no hurdles towards him”.

Prof Muigai also challenged his fellow don to come clean on his involvement in the ICC cases where six Kenyans — among them President Kenyatta and Mr Ruto — were accused of crimes against humanity. Prof Makau however denied involvement in preparation of the cases or “procuring” witnesses, only saying he trained investigators and prosecutors.

“If I did you would have known, but I have never,” he said. “I trained prosecutors and I was fulfilling obligations of the (Rome) Statute.”

On the rights of gays and intersex persons, Prof Mutua told the panel that their rights must be respected, saying the Constitution protects the rights of all Kenyans from non-discrimination and grants them equal protection.

“Nature does not choose the nature of a person,” said Prof Mutua. “If my son was intersex or gay, what would be my obligations to such a child? Should I denounce the child? Absolutely not.”

He was also taken to task after disclosing that he is not a member of any organised religious group but denied being an atheist. He said he only appreciates theology of compassion and aspires to live a life of virtue.

The don stunned the panel with his revelation that he pays all his taxes in the US and has neither a Kenya Revenue Authority (KRA) tax registration PIN nor a valid Kenyan identity card.

He further said he cleared with the Higher Education Loans Board (Helb) in July as he did not know the money he signed for at university was a loan.

Video:Makau Mutua on the spot over remark on Uhuru’s election Reviewed by samrack on September 14, 2016 .

Share thisFacebookTwitterPinterestEmailWhatsAppProf. Makau Mutua Makau Mutua on the spot over remark on Uhuru’s election United States-based law lecturer Makau Mutua was on Wednesday forced to eat humble pie over his much-publicised remarks that he would never recognise the election of Uhuru Kenyatta as President of Kenya. The controversial scholar declared he would have no trouble