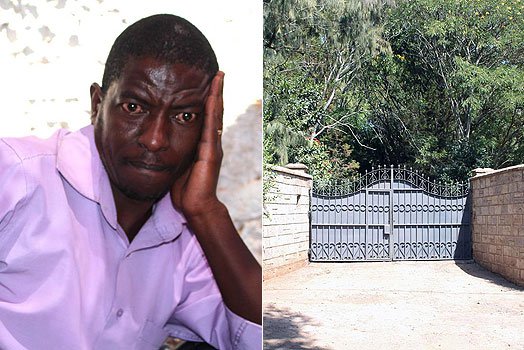 LEFT: Mr Eddie Kiarie Kariuki, son of businessman Julius Kariuki Mungai, who claims to own one acre of the land. RIGHT: The gate of lawyer Waweru Gatonye’s home in Karen. PHOTO | DENNIS ONSONGO

By LILLIAN MUTAVI
A land ownership dispute took a new twist after one of the claimant’s home was invaded on Sunday.

Lawyer Waweru Gatonye and businessman Julius Kariuki Mungai are embroiled in a land tussle that has lasted 20 years and they want National Lands Commission to intervene.

On Sunday, a group of people attempted to forcibly bring down the fence, destroying the gate and some structures meant for workers at the lawyer’s compound.

The five-acre land is said to have belonged to Regina Wahu Muigai who lost it to the two after she was unable to repay a bank loan.

Rowdy youths broke into the compound leading to the intervention of the police who arrested two people.

Mr Edward Kiarie, the son of Mr Mungai, said the land along Miotoni Road in Karen belonged to his father who bought it in 1997.

He said the disputed land was originally five acres but was subdivided when his father offset a loan that Ms Muigai had failed to clear from Post Bank.

“I brought people to fence off my father’s piece of land since we have potential buyers who do not know the boundaries. I came to show them,” he said, adding that his father was sick and needed to seek medical attention abroad and they had decided to sell the land but Mr Gatonye had blocked them from accessing it.

Mr Kiarie alleged that Mr Gatonye had demolished his father’s house when he bought the remaining four acres at an auction and also failed to leave a public road as stipulated in the original deed.

He accused the lawyer of intimidation after he hired armed guards at the compound.

However, speaking on phone Mr Daniel Waweru, the son of Mr Gatonye, said the matter was in court and he would not comment on it. He said the court had restrained Mr Mungai’s family from doing anything on the land.

Mr Kiarie denied there was a restraining order.

“The matter is in court we have won three cases now we have this one we will wait the law to take its course,” said Mr Waweru.

Speaking at City Hall, Nairobi County executive for lands Christopher Khaemba said this was the second attempt by Mr Mungai to forcibly evict the lawyer from the land after he failed to kick him out last year.

‘This is not the first attempt by the Kariukis. They are violating a court order,” said Mr Khaemba.