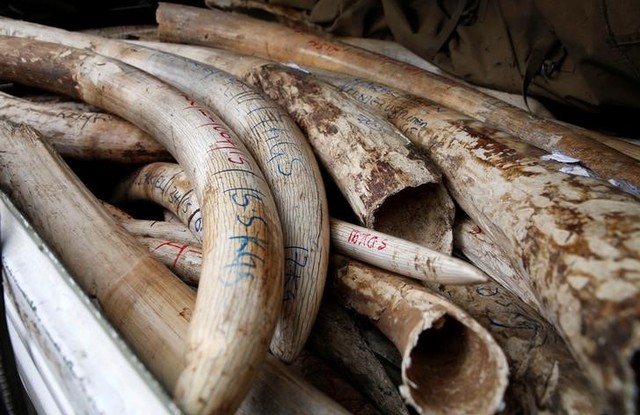 Elephant tusks are loaded on a pick-up truck at the Kenya Wildlife Service (KWS) headquarters as part of an estimated 106 tonnes of confiscated ivory to be set ablaze in Kenya’s capital Nairobi April 15, 2016. REUTERS/Thomas Mukoya

Kenyan police on Thursday seized 88 pieces of elephant tusks with a street value of 20,000 U.S. dollars in the coastal county of Kwale.

Msambweni police commander Joseph Chebusit said the ivory that weighed 41.91 kg was found in a house during an operation led by Kenya Wildlife Service (KWS) officers.

Chebusit said they are holding a woman suspect who is assisting the police with investigation.

“KWS officers and regularly police raided the house after members of the public tipped them off and managed to seize the ivory stashed in two sacks.

“We have taken the suspect to court on the offence of being in possession of tusks,” he said, adding investigations were ongoing.

Chebusit said the state of the trophies indicated that they had been in storage for long and were being prepared for transportation to a buyer in another location.

He said the investigations were on a large number of people including dealers, transporters, recipients and brokers.

The police commander said the suspect is linked to local ivory traffickers in the country.

He said the police have intensified war on poaching at main national parks where several poachers have been killed and assorted weapons recovered recently.

In 2016, Kenya set ablaze more than 100 tonnes of ivory in a move aimed at showing its commitment to saving Africa’s population of elephants.